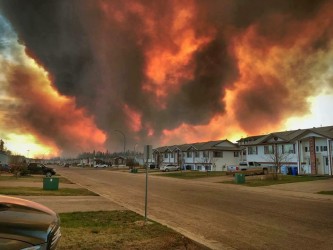 As on-site archeological work in southern Alberta comes to an end, there is anticipation about possible work in another disaster area in the province.

Archeologist Dr. Dan Meyers, with the consulting company Lifeways of Canada, is excited about the possibility of seeing what the wild fires that scorched close to 600,000 hectares this past spring in the Regional Municipality of Wood Buffalo may have revealed about Indigenous life.

“If the government had funding available to do some sort of study to see what kind of sites they can find because of the fire, I would absolutely love to be involved in that,” said Meyers.

At this point, says Wendy Unfreed, with the Archeological Survey of Alberta, the province has not yet put together a program to examine archeological finds following the northern fire.

“At this moment we’re brainstorming about how we might be able to do that but we have no definite plans at this moment,” she said.

Meyers says the fire creates a unique opportunity to discover life thousands of years ago.

Unlike the Bow River flooding, where excavations went three metres deep to find 400- to 500-year-old materials, the Fort McMurray fire could reveal 10,000 years of human occupation under only 30 centimetres of ground cover.

“The interesting thing up there (is) when you have a really bad fire like that and you burn off all the forest cover, all the moss and that sometimes it’s very easy to find archeological sites,” he said.

Otherwise forest excavation is tedious, he says, having to dig “what’s equivalent of a post hole” in the ground every five to 10 metres.

The fire, he also notes, provides an excellent opportunity to make discoveries in places that aren’t usually examined. With all the industrial work undertaken in northern Alberta, most archeological finds have been centred around oil and gas development and exploration areas.

“So instead of maybe looking at the really best places for (archeological) sites, you’re looking at where they’re developing,” said Meyers. “And sometimes those are very good but sometimes they’re simply not the best.”

“Any kind of catastrophe that creates any kind of large scale new exposure of grounds surfaces is always an opportunity to look for new archeological materials,” agreed Unfreed.

“When you can clear away that amount of vegetation and see what’s on the surface then I think there’ s a very good chance there’s probably a number of new archeological sites that have not been recorded that are probably in those areas,” she said.

So was the case in southern Alberta.

The government hired a number of archeological consultants in 2013 to assess the damage and see what was exposed on the river banks primarily along the systems of the Bow, Highwood and Sheep, and a small portion of the Kananaskis.

About 485 linear kilometres of riverbank were covered in the survey resulting in the discovery of 100 new archeological sites and additional information on 87 existing sites.

One find, in particular, had Meyers excited. It involved two distinct protohistoric layers that allowed archeologists to assess cultural changes that occurred within a short time period.

Archeological finds from southern Alberta will go to the Royal Alberta Museum.