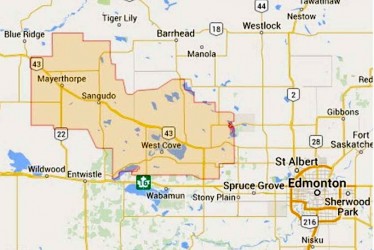 May 4, 2016. Alexis Nakota Sioux Nation residents are on one hour evacuation notice as a precautionary measure, Scott Long, executive director, provincial operations with Alberta Emergency Management Agency, said shortly after 3 p.m. today. A wildfire burning in Lac Ste. Anne County is being fought by wild fire aviation assets and ground forces, he said. There is a First Nations field officer on location.

Any residents north of the Alexis Nakota Sioux Reserve between the western boundary of highway 765, east to Range Road 41, north to township road 560 are in the one-hour evacuation notice zone.

Residents in the Hamlet of Glenevis are on mandatory evacuation notice as of 4:12 pm Wednesday.

Trish Roth, a spokeswoman for the First Nation, said two homes have been destroyed and the fire is right on the north end of the community. Residents are asked to close doors, windows and vents and follow the directions of local authorities. Visibility will be affected.