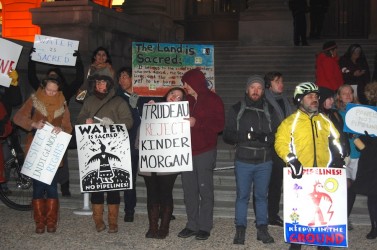 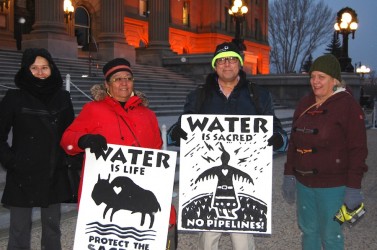 About 50 people gathered outside the Alberta Legislature late Monday afternoon carrying placards and candles protesting the Kinder Morgan pipeline expansion to British Columbia. The federal government is to make a decision by Dec. 19 on the project.

“When (Prime Minister Justin Trudeau and Alberta Premier Rachel Notley) sat with Indigenous leaders my understanding is they were not going to put in pipelines. So they’re backing off on their words.  And I know that many people are onboard around making them accountable for their promises prior to the election,” said Elder Taz Bouchier.

For Bouchier, her protest in Edmonton is just one more stand in a continuum of work for the protection of Indigenous rights and Mother Earth.

“I’m here in solidary also with Standing Rock, to gain some support for them for the atrocities and inhumane treatment they’re going through at this time,” she said.

Bouchier was in Standing Rock, North Dakota, last month and will be making a return trip in early December. Over one thousand Indigenous and non-Indigenous people have joined forces to protest the Dakota Access Pipeline, working to ensure protection of waterways, drinking water sources, wild bison herds, and sacred sites from destruction.

Bouchier was invited to the “peaceful prayer” site to help deal with the trauma demonstrators have been experiencing. Clashes with police have resulted in high pressured water hoses being turned on demonstrators in below zero weather, rubber bullets, mace, and tear gas. There have been hospitalizations and arrests.

“A lot of horrible things are going on 17 hours away from Edmonton,” said Bouchier.

While in Edmonton, Bouchier says she is keeping in touch with people from Standing Rock, providing counselling over the telephone.

“No one is planning on leaving. Many have said they would die for the cause. They know what they’re getting themselves into. They’re making that choice to go down there. And many of them are not Indigenous to the land. Many of them are Caucasian people from all over the world who said this is an atrocity, it’s inhumane treatment of the First Peoples of the land and it goes against the Constitution,” said Bouchier.

“Standing Rock is one of the many illustrations of Indigenous-led actions that are confronting the destruction from fossil fuel infrastructure development and showing us all that there is another way to build a better future,” said Eriel Deranger, from the Athabasca Chipewyan First Nation, in a statement.

Deranger is hosting an educational panel that is taking place Nov. 26 at the University of Alberta. The panel is being presented by UAlberta Native Student Services in partnership with Indigenous Climate Action. The panel, through Skype and in person, will consist of Indigenous land defenders and focus on the significance of Standing Rock and other ongoing and historical Indigenous resistance to extractive industries.

There are also a variety of fundraising activities planned throughout next week in Edmonton to support the Standing Rock community.