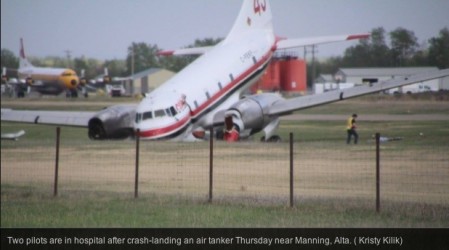 May 6, 2016. The Alberta Centre for Child, Family and Community Research is hosting a workshop that will look at how to reach Indigenous youth and prevent suicide. The workshop, entitled Mental Health Promotion, Suicide Prevention and Strengthening Resilience among Indigenous Youth, takes place May 9. Among the topics to be discussed includes putting mental health and trauma in context and looking at the impact of historical, inter-generational trauma and structural violence on Indigenous child development and caregiver support, family dynamics, and community resilience. Dr. Laurence Kirmeyer is special guest speaker.

May 5, 2016. Late Thursday afternoon a Convair 580 water-tanker plane preparing to land at the Manning airport veered off the runway and came to rest in the ditch. The plane was coming in to refuel and restock fire-retardant after conducting fire-fighting efforts at Loon River near Red Earth Creek. There were two male pilots on board. During the landing approach the pilot suffered a medical episode and the co-pilot was forced to land the plane. The co-pilot was not injured. The pilot suffered a cut to the head, but was conscious and breathing when ambulance, Manning fire department and RCMP arrived. His injuries are not life threatening. The Traffic Safety Board is following up on the event.

May 5, 2016. Alberta has enacted a province-wide fire ban. All fire permits are suspended and no new fire permits will be issued. All open fires, including campfires and charcoal briquettes, are prohibited. People are being urged to limit their use of quads and other off-highway vehicles. All OHVs are required to have a functional muffler and spark arresters. “Albertans stand with the people of Fort McMurray who have been evacuated and our first responders as they work to protect Albertans and critical infrastructure. The single best thing we all can do to help protect Alberta from wildfires is to ensure we are not creating additional risk,” said Minister of Environment and Parks Shannon Phillips. The Fort McMurray fire now stands at an estimated 85,000 hectares. There are five fires presently burning out of control in the province.

May 5, 2016. First Nations and Metis associations are among 14 recipients of an additional $730,386.75 allocated by the Canadian Environmental Assessment Agency for the proposed Frontier Oil Sands mine project, located in northern Alberta. The funding will assist recipients in reviewing and commenting on documents submitted by the oil company, and preparing for and participating in the public hearing. The funding will also assist with reviewing and commenting on the potential conditions relating to possible mitigation measures and follow-up requirements that would be necessary, if the project is allowed to proceed. Indigenous groups will also receive funding to participate in consultation activities following the submission of the panel report. Teck Resources Ltd.’s updated Frontier Oil Sands mine project proposal by would be a new 260,000 barrel per day oil sands mining operation located approximately 110 km north of Fort McMurray. The project is a truck and shovel mine which includes an open pit, ore preparation plant, bitumen processing plant, tailings facilities, cogeneration facilities, support utilities, disposal and storage areas, river water intake, fish habitat compensation lake, bridge, roads, airfield and camp. The proposed project would operate for 41 years.