Support from First Nations not surprising in time of crisis 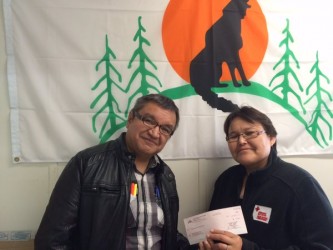 Treaty 8 Grand Chief Steve Courtoreille is grateful that Attawapiskat First Nation has donated to the Red Cross relief efforts for the Fort McMurray fire. He is grateful but not surprised.

“First Nations are always first. They’re front and centre to help even if they don’t have much,” said Courtoreille, who is also Chief of the Mikisew Cree Nation, with many members among those evacuated.

The Canadian Red Cross posted May 16 on its Twitter account that Attawapiskat First Nation had presented a cheque for $5,000.

Chief Bruce Shisheesh Tweeted, “We know what it is like to be hurt … Just because we are in a crisis, we still want to help.”

“Attawapiskat has its own challenges with youth suicide and my prayers go out to them,” said Courtoreille. “I hope this fire can help the young people there understand what they have.”

Support from First Nations and Indigenous organizations having been pouring in from across the country and the province.

Barely a day after the mass evacuation from Fort McMurray, Fort McMurray First Nation, Anzac and Gregoire Lake Estates, the Canadian Council for Aboriginal Business sent out a call to action for support to the Red Cross.

"For more than 30 years the Canadian Council for Aboriginal Business has generously been supported by business in Alberta and Canada's western provinces. We want to acknowledge this fact and once again express our deep support and commitment to being a driving force in building the bridges that support equitable prosperity for all Canadians," said JP Gladu, president and CEO of CCAB.

The Federation of Saskatchewan Indian Nations pledged its support not even a week after the May 3 and 4 evacuations, asking that its 74 member First Nations and institutions join in raising money.

“Our First Nation people in Saskatchewan have had first hand experiences with natural disasters like forest fires, flooding and tornadoes,” said FSIN Chief Bobby Cameron. “We know the feelings associated with losing your home, property and being forced to live in evacuation shelters. We are forever grateful when others helped and assisted us in times of need.”

The Circle for Aboriginal Relations will be hosting a fundraiser for evacuees as part of its May 25 gala in Calgary.

“We’ve all seen the videos of people hastily escaping a burning community. These are unforgettable scenes of people escaping an escalating crisis,” said CFAR President Todd Belot. “Now a large number of our Indigenous community members having lived in the Fort McMurray region are displaced. We are encouraged by the outpouring of support by government, municipalities, services and businesses….There is now a great need for support for those who have been displaced in terms of accommodations, food, supplies, clean clothing and toiletries for instance.”

Along with financial contributions, First Nations have also donated trailers’ full of goods to the First Nations distribution centre set up at the Treaty 8 sub-office in Edmonton.

Courtoreille says a discussion needs to take place between the federal and provincial governments, the Regional Municipality of Wood Buffalo and First Nations about how that money is going to be distributed.

“We’re not at the point of time to have those discussions,” he said. “We’re still in the reactive mode.”