The state continues to commit crimes against Indigenous peoples 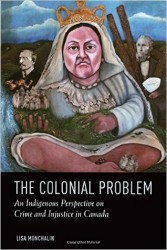 Monchalin was in Edmonton Thursday, Sept. 22 as part of her book tour for The Colonial Problem: An Indigenous Perspective on Crime and Injustice in Canada.

The lecture she delivered for the department of women's and gender studies at the University of Alberta was entitled “The criminalization of Indigenous peoples: continued colonization, sexualisation and legal manipulation” and drew on three key themes in her book.

She points to the Indian Act, adopted in 1876 but amended most significantly in 1951 and 1985, as a prime example of what went wrong and continues to be used as “legal manipulation.” Indigenous people offered their home in friendship and ended up having their land taken away.

That history of mistreatment of Indigenous people, says Monchalin, also plays a major role in the violence affecting Indigenous women.

When the Europeans came, they called the Indigenous women “squaws,” treated them as property, and sexualized them. That treatment is still having an impact today.

She calls the state of affairs for Indigenous women “a crisis.”

An inquiry into murdered and missing Indigenous women and girls is finally being held, she said, but it took too long. And Monchalin says one inquiry won’t deal with all the issues.

“I argue that the policies and discourses and strategies and initiatives, all these things of the original forefathers are still being carried out today. They may have changed… the wording here or there, but I’m asking people what is actually different?” said Monchalin.

“People need to wake up … to the truth about history…”

Education, she says, is a large part of the answer. Monchalin takes heart in the work that has begun in response to the 94 calls to action delivered by the Truth and Reconciliation Commission, with both grade schools and post-secondary institutions starting to offer courses focused on Indigenous issues and history.

What’s important for people to realize, says Monchalin, is that Indigenous people had governance structures and a legal system before Europeans came.

“Right now, one of the arguments and ways that government and the way we’ve been written about is that there was nothing here …. People came over and they saved us,” she said. “That is what they used to keep the current power structures in place…. And that is untrue.”

Monchalin would like Indigenous peoples in her lecture to leave fired up, ready for change and ready to take action.

“I want us all to stand together and … I want people to take away an excitement, a motivation and say, ‘Yes, let’s do this,’” she said. “I want to inspire our people to make change.”

For the non-Indigenous attendees, she wants them to reflect on what she is saying and gain an understanding of the role history has played in putting Indigenous people where they are today. She wants them to become allies.

“I want people …to just listen and support and hopefully take away some information … give them something to take back into their everyday life,” said Monchalin.