Sisters take next step to explore identity – together 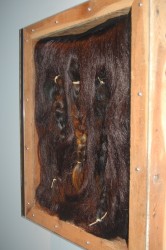 For years, Brittney Bear Hat and her older sister Richelle Bear Hat have been exploring their identity in individual projects. But now they have come together for that exploration and the result is a show at the Art Gallery of Alberta. Right next door to the main feature 7: Professional Native Indian Artists Inc.

Photo: Sisters Richelle and Brittany Bear Hat learned from their father that in grieving a family member cut their braid to acknowledge that legacy and loss. This is one of 10 framed boxes exhibited in the RBC New Works Gallery in the Art Gallery of Alberta.

Brittney Bear Hat is still thrilled almost two months later about the opportunity to meet and talk with Joseph Sanchez and Alex Janvier, members of the Indian Group of Seven.

“It was amazing. It was nice to see the generation that was so captivating with their work,” said Bear Hat. The excitement of meeting the famous artists figures right up there with the Little Cree Women (Sisters, Secrets & Stories) show that Bear Hat shares with her sister in the RBC New Works Gallery.

“This is a project we’ve kept in the back of our minds for some time,” said Bear Hat. “Working with Richelle was definitely a great bonding experience … We had to wait for the right timing and I think this was it. We were both really, really open to one another’s ideas and the conversations we wanted to have with this work.”

The exhibit consists of 10 framed works, each including something that was gifted to them by a family member and tied to their father, Arthur Chipesia. Each display holds knowledge they have learned about their family and about themselves.

“It’s about us growing up, our histories, our connections to our father. We have these shared stories, we have these secrets, the bond between me and Richelle and we wanted to explore all aspects of those,” said Bear Hat. “This brought both of our works to another level, another level of personal.”

The two sisters, of Blackfoot and Cree heritage, grew up in Calgary, embracing an urban lifestyle. Both graduated from the Alberta College of Art and Design in 2011.

Bear Hat says her art work first started by looking at what she didn’t have as an identity before she started embracing what she was and not what she wasn’t. For Richelle, it was examining her relationship to her mother (who passed away when the girls were young) or rather her disconnect as she, unlike the rest of her siblings, didn’t look like her mother. Then Richelle started layering pictures of herself over her mother and, said Brittney, “I could see my mom in “(Richelle’s) face and I really didn’t realize it.”

This exhibit, says Bear Hat, is a natural progression of both hers and her sister’s work.

“I would like for Richelle and me to continue collaborating… I think it needs to keep going,” said Bear Hat.

“This is a very major exhibition for both artists. They’re emerging artists so this is a significant exhibition,” said curator Kristy Trinier.

Trinier expects exposure in the AGA will have an impact on the Bear Hat sisters’ careers, considering the RBC New Works Gallery only hosts three or four exhibits each year.

“Both girls are so incredible to work with, very organized, very thoughtful and considerate artists… so I hope this opens up more opportunities for them to explore their heritage in a way that maybe in the past, they hadn’t been quite as brave about it,” said Trinier.

The exhibit will be in the gallery until July 3.