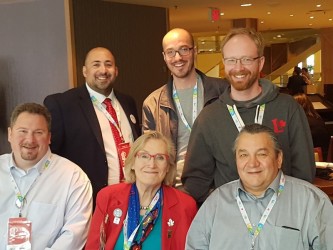 Métis have a proud heritage in Waterways and Dan Stuckless wants that tradition to continue as Fort McMurray rebuilds.

“The Métis people should be front and centre when this rebuilding effort is going on because it was the Métis people that really built up the community of Waterways before the city of Fort McMurray back in the early days,” said Stuckless, who serves as general manager of the McMurray Métis Local 1935.

Photo: Last weekend, McMurray Métis council and staff attended the Liberal biennial convention in Winnipeg, where they meet with a number of ministers including Indigenous and Northern Affairs Minister Carolyn Bennett. There was a strong focus on Indigenous issues at the convention including multiple meetings with cabinet ministers to discuss the wildfires.
(Photo: McMurray Metis Local 1935)

But efforts to play a key role in moving development forward have stalled in red tape.

“We’ve hit bureaucratic road blocks along the way. It seems like we get bounced around from agency to agency with people who can’t make decisions or don’t know what’s going on. It’s been a pretty good time waster for us,” said Stuckless.

In the wild fire that swept through Fort McMurray and forced the mandatory evacuation of close to 88,000 people, the McMurray Métis Local was hit hard. Before the office burned to the ground, computers were salvaged as were a number of artifacts that were being saved for a museum.

Now, the Métis local wants to turn that loss into an opportunity. The local wants to use the land they have leased for the past 20 years on a year-by-year basis for housing. Since they want to invest in the property, they want to turn the lease into a long term commitment. But Stuckless says that although they are on provincial land, they are being told to go through the municipal permitting system.

“But it’s not so easy to do. It’s been pretty frustrating because we’ve been trying to go through the appropriate channels but they don’t seem to be pretty well organized right now…. Normal government functions shouldn’t be this difficult,” said Stuckless.

He says they need permission to get the insurance to clean up the land and then be able to build. He is hoping government contact information he received recently will move the issue forward.

“(We want) to contribute and participate in the economic engine of Canada and, also now, to provide dual service to newly homeless Métis people, who are our members,” said Stuckless. “We would have to rebuild office space. We have members without homes and we have businesses to run. Moving a lot of those things into one location would make sense for us.”

It has been confirmed that seven homes have been lost by Métis members, he says, and even more have been impacted by the province’s announcement earlier this week that those with houses still standing in Waterways, Abasand and Beacon Hill will not be returning to live in their residences until likely September. Toxins in the soil and ash forced the province to revise the re-entry schedule for those neighbourhoods.

“People have been pretty open-minded about what could or could not happen. I think they were optimistic things would work out but were prepared for something like that. It’s not thrilling news,” said Stuckless. “Now they’ll move to the next phase of figuring out what they’re going to do on a temporary accommodations.”

The Métis Nation of Alberta will continue to provide support in finding accommodations and Red Cross says it will as well, says Stuckless.

About 300 Métis members were displaced during the fire, with MNA helping them along with about 100 others related to members, with a variety of services.

Stuckless says some members did have trouble accessing the first round of Red Cross funding. Those difficulties arose through lack of appropriate identification, registering too early, or lack of computers and smartphones, in order to register. However, Stuckless says, most of the issues have been resolved, with the Red Cross assigning a contact person for the Métis local to refer their members to. Stuckless doesn’t anticipate any difficulties for members accessing the newest round of funding announced by the Red Cross earlier this week.

Stuckless expects that most Métis members, who are able to, will return to Fort McMurray even just for a short period of time to assess their homes. Stuckless and his wife, without their four children, will be among those to do just that. He knows his house is still standing. He says they will make the trip following the four-day re-entry schedule and then will then return to Edmonton to be with their children.