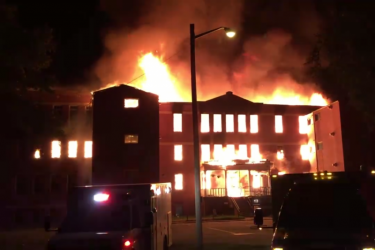 The investigation into the fire that destroyed Red Crow Community College on the Blood Indian Reserve last August is expected to wrap up soon.

“There was a lot of discussion with the fire commissioner and stuff and there were some people we wanted to talk to that were hard to track down,” said Sgt. Jason Colon, of the Blood Tribe Police Service, as to why the investigation has taken so long.

At this point, he adds, no charges are pending.

Initial speculation had been that the fire was arson.

With $25 million needed to rebuild Red Crow college, Vice President Henry Bigthroat says the gala and pow wow in September to celebrate 30 years of operation will not include an announcement that the money is in place.

While the generosity that allowed classes to relocate and operation to continue was overwhelming, getting the finanicing to rebuild hasn’t been as easy.

“We haven’t raised much to date, hardly anything,” said Bigthroat, who is frustrated with how the process has gone. “We’re trying to deal with the governments and private industry but it’s different when it comes to (First Nations) post-secondary institutions.”

Ottawa has no funding for post-secondary institutions, he says, and the province won’t give money because the building is on federal land and First Nations’ education is considered a federal responsibility. Meanwhile private companies want to see their money matched by the provincial and the federal governments.

The band has donated land and will help with the infrastructure, says Bigthroat.

Red Crow college will be rebuilt across from the existing site.

“In Blackfoot tradition, when a dwelling is burnt, we cannot rebuild where it was burnt. We have to move from that area. Our Elders strongly recommended that we do not rebuild there and then, it has a really bad, rotten history,” said Bigthroat.

Prior to being the reputable college it is now, the building that housed Red Crow college was the site for St. Mary’s Indian residential school. Erected in 1911 under the authority of the Roman Catholic Church and the Missionary Oblates of Mary Immaculate, the school was part of the IRS system until 1975. It was given to the Blood tribe shortly after, with the Blood tribe taking over post-secondary education from Indian Affairs in 1990.

The college has been a point of pride ever since then. Under Blood administration, the school was first used for adult upgrading then became the Red Crow Community College in 1995. It was the first tribal college in Canada.

For the past academic year, Red Crow college has been offering classes and administration out of a vacated elementary school on the First Nation. The school had been closed because of mould and other issues, but those issues were dealt with. Enough classrooms, including one re-configured for five administration offices, allowed all courses to be offered and all students to be accommodated. Insurance came through with some immediate funding to cover materials, says Bigthroat, and other Treaty 7 First Nations, individuals, non-Aboriginal post-secondary institutions, and corporations all pitched in with cabinets, books, desks, furniture and computers.

But with a $25 million building in the plans, it hasn’t been as easy to get the support for the capital project.

Bigthroat is expecting insurance to cover less than half of the budget, and then expects the college’s foundation, Mikai'sto, to apply for grants. Mikai'sto Foundation is also accepting donations and a GoFundMe page has been set up. According to the GoFundMe page, $4,905 has been raised in 11 months. The goal is $50,000.

To make full use of the insurance payout, Red Crow Community College must be rebuilt within two years, says Bigthroat.

Red Crow Community College offers a multitude of accredited programs and partners with a number of post-secondary institutions including the University of Lethbridge, Blue Quills First Nations University and Neechi Institute.

Bigthroat is particularly proud of how the Blackfoot culture is fully embedded in all the programming offered by the college. He says the college is now helping other post-secondary institutions to Indigenize their programming.

“We’re a resilient people and we just keep going. Nothing is stopping,” said Bigthroat.