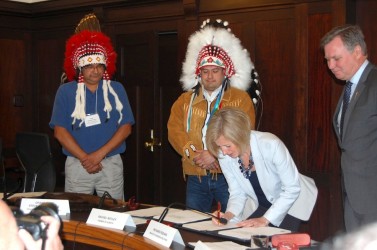 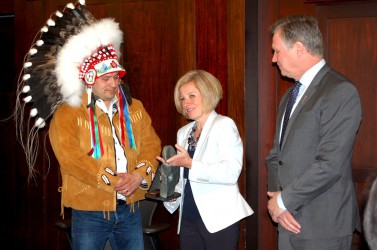 A protocol agreement establishing how Treaty 8 and the province will work together on an ongoing basis was signed Tuesday.

“Actions will speak louder than words,” said Treaty 8 Deputy Grand Chief Isaac Laboucan-Avirom. “I’m looking forward to the challenges. There are many challenges in front of us from the environment to economy to education, so the collaboration and the cooperativeness to work from nation-to-nation, government-to-government is going to be a good step in the right direction. It’s been a long time coming but again the measuring stick will be in the action.”

Premier Rachel Notley accepts a gift from Treaty 8 Deputy Grand Chief Isaac Laboucan-Avirom as Indigenous Relations Minister Richard Feehan watches on. Presentations were made after the signing of a protocol agreement between Treaty 8 and the province.

The protocol agreement will provide a mechanism to address numerous issues including consultation, development and the environment; economy and employment; municipal affairs, education; health; and, infrastructure.

“What’s different now is that we have an opportunity for all the ministers actually sitting face to face at the table with all of the Chiefs looking at each specific issue ….and specifically design plans to move forward on each of these issues with the communities involved so they’re determining for themselves,” said Indigenous Relations Minister Richard Feehan.

The protocol agreement is just the latest in a number of steps the province has taken to strengthen its relationship with First Nations, says Premier Rachel Notley. She points to the province’s push for a national inquiry into murdered and missing Indigenous women, its apology to residential school survivors, and its implementation of the articles from the United Nations Declaration on the Rights of Indigenous Peoples.

“I look forward to continuing our government’s record with respect to demonstrating our desire to fundamentally transform the relationship with First Nations leaders and communities across the province as I think we are obliged to do,” said Notley.

The protocol agreement provides Treaty 8 people with not only a means to address issues, says Laboucan-Avirom, but also the ability to make their own decisions.

Among the discussions he would like to see occur include resource revenue sharing considering the natural resources within Treaty 8 traditional territory.

“Anything that creates a better quality of life for our people and for Albertans,” said Laboucan-Avirom. “The essence of treaty was also working together, cooperating and helping each other. We just want to help ourselves, help our communities and be here for the rest of the country and the greater good of the province.”

Feehan says in the past years there have been good intentions to work with First Nations, but whether through strategy or circumstance that has never happened.

“As we move forward on any kind of project, on any kind of issue … there needs to be an understanding that we need to engage with First Nations leadership not run after it when we discover the problems afterwards,” said Notley. “It goes to this fundamental issue that … wherever you are in the world, people need to know they have the ability to … make their own determinations.”