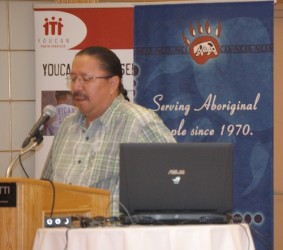 Two-thirds of the youth enrolled in WrapED are Indigenous.

Given the systemic issues facing the Aboriginal community – Indian residential schools, foster care, high incarceration rates, poverty, intergenerational trauma – it’s not surprising that in the two and a half years the program has been operating in Edmonton that the numbers of Aboriginal youth are so high, says Jodene McIsaac, program manager with Native Services Counselling of Alberta.

WrapED is specific for youth who are at high risk of gang involvement.

NCSA is one of six partners that collaborates for WrapED or Wraparound Edmonton.  All the partners - Africa Centre, Edmonton John Howard Society, Edmonton Police Service, Native Counselling Services of Alberta, REACH Edmonton and YOUCAN Youth Services – work to provide full services or wraparound services, for the youth in the program.

“For a lot of these young people (a gang) is the best support they have had. There’s a place to sleep, what they perceive is safety for them. They’re perceiving it as safe place to be. They’re seeing support. They have people around them. They’re not lonely. This is the information the kids gives us. It’s not the healthiest environment, but for them it’s a safe place where they feel their needs are being met,” she said.

“Through that relationship they build a team of people around them to provide wraparound supports to the young people,” said McIsaac. “It’s just ongoing support.”

“Having that balance with our young people isn’t there and having that spiritual part is really important,” said Auigbelle, who counsels men who have been incarcerated. “A lot of them didn’t see organizations like this in their time. They had no place to go.”

Auigbelle says a program like WrapED is important for youth, who want to be helped.

“It’s about relationships we have with all creation and how we’re all connected to everything in this world. Sometimes we forget we’re part of that circle and we tend to put ourselves outside that circle,” he said.  “We all have that need to better our lives somehow, to leave that hurt behind, which is not our fault. Most of the time it’s not our fault when we’re young. It’s put in front of us without our consent. But with that help, it makes a big difference.”

Funding has been approved for five years for WrapED.