Prentice hailed as moving in the right direction 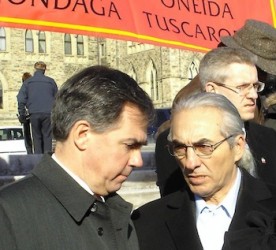 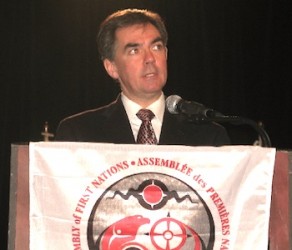 Athabasca Chipewyan First Nation Chief Allan Adam is one of many people to recognize former Premier Jim Prentice for his dedicated work.

Prentice, and three others, died when their Cessna Citation business jet crashed last Thursday evening near Kelowna, B.C. They were on their way back to Calgary after a golf trip.

“From a political stand point of view, when Premier Prentice took over in office after (Premier Alison) Redford, one thing he tried to do was engage with First Nations people because he knew how important it was to work with the First Nations of Canada because of his interactions with them while he was the minister of Aboriginal affairs with Canada,” said Adam.

“He started a lot of things, especially while being with Indian Affairs,” said Assembly of First Nations Alberta Regional Chief Craig Mackinaw. “There were a lot of things he was trying to get going.”

Prentice served as ministers for Indian affairs and northern development as well as the environment from 2006 to 2010 under Prime Minister Stephen Harper. During that time, Prentice worked on addressing Indian residential schools, which led to Harper’s apology in 2008. He also created the specific claims tribunal.

Prentice was elected premier in September 2014 and took on the portfolio of Aboriginal relations. He was the first premier to do so.

“He knew what it took when it came to the table. His platform as premier of Alberta was that things had to get moving in the direction where we would have to get the consent of the First Nations people. He knew how important it was for Alberta and Canada alike,” said Adam.

In a contribution to The Globe and Mail on Saturday, Redford wrote about Prentice, “Jim had a way of connecting with people that allowed for thoughtful discussion on the issues that he had come to care about: community, First Nations, the environment and the land.…Today, we are faced with the very real economic challenges that impact our lives as a result of climate change and the historic lack of meaningful dialogue with First Nations.”

Among his provincial accomplishments, Prentice became the first sitting premier in nearly two decades to travel to northern Alberta to visit First Nations. In October 2014, he became the first premier to visit the Lubicon Lake Band community of Little Buffalo, helping them launch a land claim. He signed a letter of intent with Fort McKay First Nation Chief Jim Boucher to develop a sub-regional plan to protect traditional territory around Moose Lake.

In a statement released by Metis Nation of Alberta, President Audrey Poitras called Prentice “very supportive” of the MNA’s mandate, which included his government’s support for the Métis Crossing historical site.

But it wasn’t all roses. The ACFN took legal action against Prentice’s government in January 2015, challenging the newly created Aboriginal Consultation Office which said consultation with ACFN for the TransCanada Pipeline’s Grand Rapids Project was not required. The PC’s 2015 budget included a $1.4 million slash in grants to school boards for Aboriginal students. While collaboratively working with First Nations was on the table, resource revenue sharing was not. And Prentice was not in favour of a national inquiry into murdered and missing Indigenous women and girls.

But despite the battles, Adam says Prentice needs to be lauded for his forward thinking in realizing a strong relationship had to be built with the country’s Indigenous peoples.

“Regardless we couldn’t succeed in the endeavours he wanted to accomplish, you have to give the man credit for trying,” he said.

The PCs were decimated by the NDP in the May 2015 election and Prentice, although having won his Calgary-Foothills seat, resigned as both party leader and MLA immediately.

“If he had won the election things might have changed differently but that wasn’t the outcome and you can’t weigh your options. You could only imagine or think of the positive things that were to come. And he was in the right direction,” said Adam.

In a statement, Premier Rachel Notley said Prentice had “served our province in so many roles for so many years. He deeply loved Alberta. He worked tirelessly for all of us, in the true spirit of one who is committed to public service. I benefited from his advice, and the Government of Alberta is continuing to pursue many of his initiatives.”