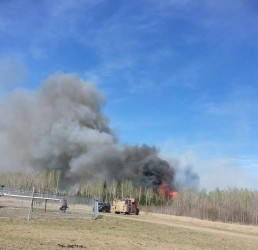 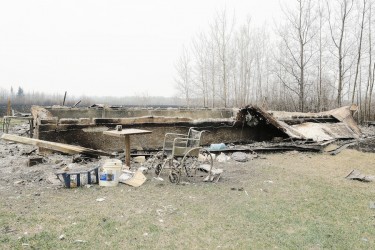 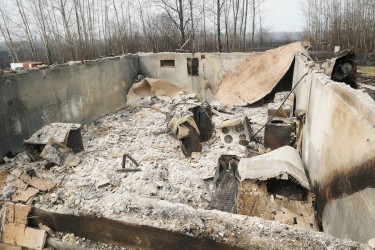 Paul First Nation Councillor Myrna Rabbit credits the commitment of band members as the reason why only one home has been lost to date due to a wildfire.

On Monday evening, RCMP ordered a portion of the First Nation to be evacuated, but many residents stubbornly stayed behind.

“The fire came so close. The fire probably could have taken more homes,” said Rabbit. “But family members, they chose not to leave. They actually took whatever precautions they could to protect their homes.”

People used hoses and buckets to wet down the threatened houses and yards. Neighbours joined in to help out those with homes in the line of fire.

The one home that did burn had been evacuated. It housed a mother, her three grown sons and, Rabbit says, perhaps the grandchildren as well.

Eventually, about 140 people did leave the reserve. That represents about one-third of the First Nation’s population. They took refuge in hotels in Edmonton. Many were relocated with only the clothes they were wearing.

The Paul First Nation declared a state of local emergency on Monday.

Returning will be assessed on a day-to-day basis, but residents will not be going home on Wednesday, says Rabbit, as the fire is still burning and the smoke is still heavy.

Alberta Health Services has issued a precautionary air quality advisory for Parkland County, west of Edmonton, which includes Paul First Nation. Air quality is expected to be variable across the county depending on the fire and windy conditions.

“In smoky conditions, even healthy individuals may experience temporary irritation of eyes and throat, and possibly shortness of breath,” said AHS in its advisory.

Rabbit says both neighbouring First Nations and rural communities have reached out to the Paul First Nation.

“We’ve had quite a bit of donations, a tremendous amount of help from our neighbours,” she said.

Those evacuated are angry at the possibility that the fire was caused by carelessness, says Rabbit. Of the 21 new wildfires that started in the last 24 hours, four are manmade and 17 are under investigation. None are credited to lightning strikes. To date, 178 fires, 39 of which are still active, have claimed approximately 580 hectares of land.

The Parkland County mayor also declared a local state of emergency on Monday with residents in the hamlet of Duffield evacuated for a second time in two days.