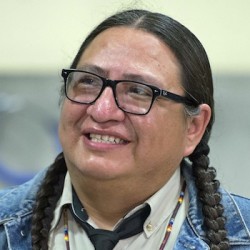 The environmental stewardship that the NDP government has embraced as policy is an opportunity for Indigenous people to lead.

“We have that ancestral connection as environmentalists to take care of Mother Earth, to look after Mother Earth and in turn Mother Earth looks after us. But in order for us to do that we’ve got to create some sort of systems where we’re not destroying or creating havoc in regards to the environment. That’s where I see First Nations have that ability to step on board and do that,” said Desmond Bull.

Bull, a councillor with the Louis Bull Tribe, is also one of two Indigenous appointments to the province’s Energy Efficiency Advisory Panel. Bull was the driving force behind his First Nation’s recent move to install solar panels on four buildings.

From solar panels to wind turbines, Bull says First Nations have much to offer so it’s vital that they not only lead in the green energy movement, but that they take advantage of the money the province has laid out for such initiatives.

In the first year alone, the province is allocating $45 million in an effort to get green energy on line. Over five years the dollar figure, through grants and subsidies, will reach $645 million. It’s money Bull wants to see Indigenous communities taking advantage of.

The Energy Efficiency Advisory Panel plans to host a number of centralized engagement sessions for First Nations and Metis communities later this month and into October.

“I really want First Nations people to be in attendance at these engagement sessions,” said Bull. “It’s very important with the amount of money that’s going to be poured into these projects.”

Bull says Indigenous communities can use the government funding to build capacity, develop their own energy systems, create employment and provide training.

“I don’t want to see what happened with the oilsands, where that First Nations’ manpower was really waiting to get on board with that industry and nothing ever really effectively happened,” he said.

“This is where we try to reach out to the groups who have already done this, say, ‘You have already proven this can be done, it would be great to create some kind of model or template so First Nations can follow that,’” said Bull.

In moving forward with renewable energy development, Bull would like to see First Nations form a co-operative. By working together, he says, they can pool their expertise, develop trustworthy sources for advice and inspections, and buy hardware and equipment in bulk therefore reducing the costs.

The panel is to provide a report to Environment and Climate Change Minister Shannon Phillips in November. The government is supposed to move forward on those recommendations in early 2017.

In light of the calls to action from the Truth and Reconciliation Commission and the commitment to implement the United Nations Declaration on the Rights of Indigenous People, Bull has every confidence the Notley government will follow the recommendations, which specifically pertain to Indigenous involvement.

“There are all these mechanisms in place and all of them are pointing to how we have to work with Aboriginals, the First Nations, how we have to the ability to bridge and build that connection Nation-to-Nation, an understanding through the treaty. That was supposed to be an understanding that was flowing through today. Right now I believe it’s actually coming to fruition,” he said.

But Bull is adamant that Indigenous people play an active role in making this happen.