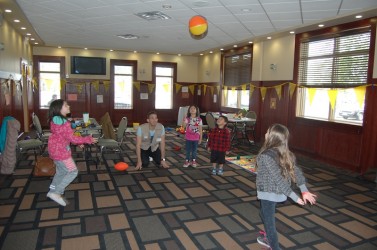 For the second time in three years, Save the Children has come west to set up safe spaces for Indigenous children displaced by a disaster.

Photo: Save the Children staff member Yannis Koumarianos plays with some children at the safe spaces area set up at Chateau Nova hotel for children evacuated during the wild fire near Fort McMurray.
(Photo: Shari Narine)

“We came in because we heard about the disaster. Because of the scale of that and the number of children that would be impacted, we knew that a child-friendly space, or potentially other programming, would be likely of support to the community,” said Katharine Harris, national senior manager in communications with Save the Children.

In 2013, Save the Children responded to a need on the Siksika First Nation, which arose from the southern Alberta flooding. Now, it’s the evacuation of residents from Fort McMurray, Anzac, Gregoire Lake Estates and Fort McMurray First Nation due to an out-of-control wild fire.

A team of 13, with members from Canada and the United States, deployed from Toronto arriving in Edmonton last Thursday. It was important for them to mobilize quickly, says Harris, as their niche focus is children. People were evacuated from the southern areas of the Regional Municipality of Wood Buffalo on May 3 and 4.

Harris says that in talking to staff at Northlands Expo, the reception centre for evacuees established in Edmonton, she was told that some First Nations communities had relocated to hotels in the west end of Edmonton. She spoke to the staff at Chateau Nova hotel and was told that a large number of evacuees were staying there.

“It started with us delivering to a couple of very expectant moms, some new born baby packages, and then we talked to the hotel about setting up a child-friendly space,” said Harris.

The hotel, which is offering lodging and meals at a discounted rate to evacuees, was open to the concept and offered up a play area.

A second safe space opened at the University of Alberta on Wednesday. With over 1,000 people calling student residence home, Harris expects the number of children attending there to grow.

A “safe space” is important for children caught in trauma, she says.

They need to know their parent or caregiver is nearby, they need to have an area they can feel comfortable in, and they need to understand that they are safe.

“Kids don’ know that tomorrow isn’t going to be just as bad and just as scary as today was and we need to make sure they feel supported and know that right now, in this moment, in this space, they are safe,” said Harris.

Save the Children personnel work with parents to determine appropriate activities that are reflective of the situation the community has experienced. Activities can range from building with blocks to non-formal learning opportunities. The staff will soon be augmented by teachers evacuated from Fort McMurray Catholic Schools, who are receiving Save the Children training.

“Kids are incredibly resilient, but they like routine and sometimes the routine of coming to a child-friendly space can be of assistance to recovery,” said Harris.

Harris says she expects Save the Children to work with the evacuated children for one to two months, but the organization’s commitment could run longer.

“What we tend to say is we come in and we stay. When the needs of Fort McMurray and environ change from immediate response to recovery, then we’ll talk to them about if/how we can assist with that,” she said.

While Save the Children’s domestic response program is fairly new in Canada, Harris is pleased that she and her team have been able to be of help in this situation.

“This child-friendly space is of specific significance to us because it’s catering to First Nation communities. That is a real focus for Save the Children in Canada and we have a national Indigenous program that we’re just starting to get off the ground,” she said.

Harris says more child-friendly spaces could be added in Edmonton if the need is identified.