Offenders must be heard during MMIW inquiry 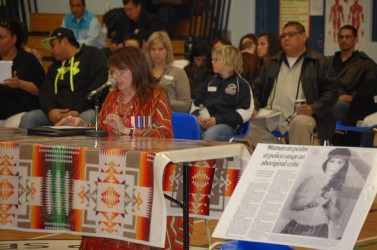 Stanley Venne, who is president and founder for the Institute for the Advancement of Aboriginal Women, sits on the National Aboriginal Advisory Committee for Correctional Services Canada.

Stanley Venne contends it is important to not only hear from the men, but also to talk to them.

“We’re always in that position. We feel so sorry for the families and the children and the trauma and the effects of losing one of our women, but we’re after a bigger objective, which is to stop the killings,” she said.

Women are still going missing. Last week, a number of Chiefs in British Columbia combined their efforts with family and community members in the search for Caitlin Brandy Potts, 27, last seen in Enderby, B.C. on Feb. 22. She had told friends she was on her way to Calgary. She hasn’t been seen in Calgary and the Calgary police are also involved in the investigation.

“I want the inquiry to be well done, well thought-out, very respectful so I’m willing to certainly give them the opportunity to do that… I’m hoping that’s the reason, that they really are being careful in how they proceed,” said Stanley Venne.

Ministers Carolyn Bennett (Indigenous and northern affairs), Jody Wilson-Raybould (justice and attorney general) and Patty Hajdu (status of women) wrapped up their cross-country consultations with families of victims, Indigenous organizations and provincial and territorial representatives about the scope and mandate of the inquiry in mid-February. Officially, there are approximately 1,200 murdered and missing Indigenous women, but many Indigenous groups believe that number to be higher.

In February Bennett stopped in Edmonton and was joined by Hajdu in Calgary.

“I think what we heard from the families across the country is that this is very important to them that they get to speak directly to the people who hopefully will be able to make the changes necessary to stop this tragedy,” said Bennett, who added she was “honoured” that they trusted her with their stories.

“This is going to be one of the most, in my view, the most mind-changing inquiries and I pray that it will be done comprehensively. That it will address every single issue that is brought before them,” said Stanley Venne.

“We’ve got to say, ‘These are the reasons why this happened, and we’re going to address them,’ and we’re going to see that our girl-children and our women are going to be proud citizens in this country, not walking around with fear and not in jeopardy. I’m not saying they’re all afraid but they have the potential to be murdered,” she said.

Photo: Prior to the change in federal government and a commitment from the Liberals, Muriel Stanley Venne made many presentations calling for a national inquiry into murdered and missing Indigenous women and girls. (File photo)