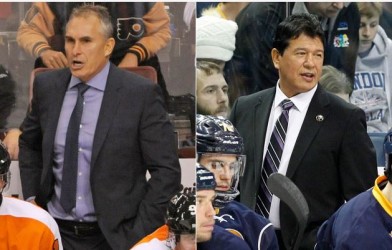 There was no break for Buffalo Sabres interim head coach Ted Nolan this month.

While the National Hockey League was enjoying a hiatus during the 2014 Sochi Olympics, Nolan was still behind the bench, but leading the Latvia hockey team.

It is just one more accomplishment for Nolan, who is part of hockey history in the NHL. For the first time ever, there are two First Nations coaches behind the benches at the same time.
Nolan, who is from Ontario’s Garden River First Nation, is joined in the record books by Craig Berube, a Cree from Calahoo, and head coach of the Philadelphia Flyers.

Aboriginal minor hockey officials from Alberta are thrilled that Berube and Nolan, who are also both former NHL players, are leading their respective franchises. And they believe Aboriginal players and coaches from within the province are being inspired to go on and achieve hockey greatness themselves.

“I think it’s opened up their eyes and lets them know that these opportunities are out there,” said Desjarlais, who for the past few seasons has also served as the manager of the Alberta boys’ squad that competes at the annual National Aboriginal Hockey Championships.

Desjarlais says even Aboriginal adults, who are involved in minor hockey, are taking notice of the feats of the two professional Native coaches.

“It’s a good thing for us,” he said. “It also encourages us to keep going.”

Because of his responsibilities as a band councillor for the Frog Lake First Nation, Desjarlais is not coaching a team this season.
But Desjarlais, who is certified to coach at the junior level, was instrumental in helping Frog Lake land an expansion team in the North Eastern Alberta Junior B Hockey League.

Desjarlais will serve as the general manager of the Frog Lake T-Birds, who will begin play during the 2014-15 campaign. The NEAJBHL has two other First Nations teams: Onion Lake and Saddle Lake.

With Berube and Nolan guiding their NHL teams now, Desjarlais says many Aboriginal residents from Alberta are discussing the fortunes of the Flyers and Sabres.

“Hockey guys talk about it,” he said. “And now we’re searching for tickets when (those teams) come to Edmonton.”

Berube, who had been serving as an assistant coach with the Flyers, was promoted to head coach this past October when Philadelphia fired its bench boss John Stevens, after the club started the season with three straight losses.

The Sabres brought in Nolan as their interim head coach in mid-November as the struggling Buffalo side had only managed to win four of its first 20 contests.

Nolan had previously served as head coach of the Sabres for two seasons, 1995-97. He was named the NHL coach of the year for his efforts with the Buffalo squad in ’96-‘97.

Nolan was also the head coach of the NHL’s New York Islanders for two seasons, from 2006-08.

Since 2004 Nolan has spearheaded the Ted Nolan Foundation, a charity promoting healthy lifestyle choices for Aboriginal youth.
Priscilla Swampy, who has been the manager of Alberta’s female entry at the NAHC in recent years, has met Nolan and is impressed with his feats and character.

“I’m really proud of Ted Nolan and his accomplishments,” she said. “And he does a lot for the (Aboriginal community).”