MNA to speak with one voice in consultation, accommodation policy with province 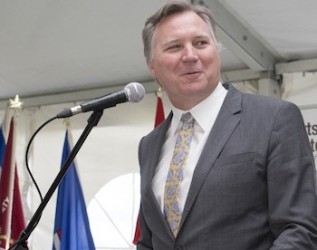 The Metis Nation of Alberta has adopted a statement of principles that it hopes will guide discussion with the province when negotiations on consultation and accommodation take place.

The Statement of Principles on Crown Consultation and Accommodation with the Metis in Alberta was passed unanimously at the MNA’s annual general meeting Aug. 4-7 at the Métis Crossing historic site.

“The whole document … sets out the cohesiveness and togetherness we need in going forward,” said Tyler Fetch, associate director of sustainable development and industry relations for the MNA.

The 23-page document took six months to develop by the MNA consultation policy technical working group, which consisted of members from each of the MNA’s six regions.

There were challenges in developing a document acceptable to all the regions, but Fetch says that was to be expected when dealing with something province-wide.

“It’s time consuming when you’re trying to balance a lot of different interests. I mean, it is consultation developing a policy with the province so there are a lot of interests involved,” he said. “But for the most part, the Metis of Alberta understand and recognize they need to work together and want to work together.”

The key, says Fetch, are the regional protocols that were included, which allow for variations, identified by the regions, to become part of the process. These still have to be negotiated within the MNA.

Fetch says the cohesive approach brings power to a voice that, at times, has been disjointed.

The document clearly defines the MNA as representing the rights-bearing Metis in the province.

“(It) sets out some of those key principles when dealing with the Metis in Alberta, how are we to be dealt with? And I think the big central part of that, is that we’ll decide. It’s kind of empowering in that sense,” said Fetch.

And giving the Metis that power is in keeping with the new approach embraced by both the federal and provincial governments through adoption of the United Nations Declaration on the Rights of Indigenous Peoples and the 94 calls to action outlined by the Truth and Reconciliation Commission, Fetch points out.

“I think that the precedent has been set time and time again that these governments are wanting to do right by the laws, essentially, that say these are principles … in dealings with Aboriginal people. In upholding that honour that is so often spoken of and it hasn’t been done in the past,” he said.

But Fetch anticipates potential conflict with the province when it comes to the MNA’s definition of Metis land.

“What we’re talking about is the province of Alberta as Metis land so we will decide, through the consultation process, when our rights are being adversely impacted,” said Fetch.

This means, he adds, that Metis rights will not be restricted to the eight Metis settlements in northern Alberta and the limited area around the settlements in which Metis are allowed to harvest. The MNA are undertaking internal studies, both historical and contemporary, to prove that Metis have travelled and continue to travel throughout the province.

“I think it’ll be very difficult for the province to wrap their heads around the current processes and how that fits in with the Metis outside of the settlements,” said Fetch.

In April, the province announced the implementation of a consultation policy with the Metis Settlement General Council, the administrative structure for the eight Metis settlements.

“The Aboriginal Consultation Office has to be able to operationalize this (new consultation policy). Industry wants something they understand. So you’re dealing with all of these different priorities. I hope that we can sit and actually have that conversation about how this should roll out … what it should look like and why it should look like that,” said Fetch.