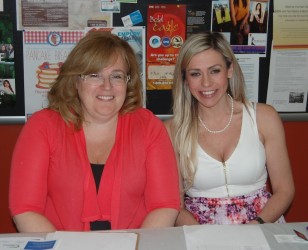 Métis citizens who were forced to evacuate their homes in the Regional Municipality of Wood Buffalo early last week are turning to the Métis Nation of Alberta for immediate support.

The majority of the approximately 5,000 Métis evacuees – and that number does not include Métis citizens who left Fort McKay on Saturday under a voluntary evacuation order – are in Lac La Biche and Edmonton. But Sara Parker, director of intergovernmental affairs with MNA, expects most of them to end up in Edmonton.

“Right now we’re trying to figure out what their urgent needs are and trying to help them with that because what we’ve found is people know we’re here so they come here to try and access most of their supports,” said Parker.

On Saturday, the MNA teamed up with the Primary Care Network to offer medical support for Métis evacuees. The MNA office on Kingsway Avenue, as well as PCN’s nearby Mira Health Centre Site, had medical staff available.

“We’re really lucky we have this opportunity to help. Our team is doing this on the weekend because we really care. We’re doing what we can. We realize how hard it is especially when you’re talking with people who’ve really been through such a terrible ordeal,” said Colleen Enns, executive director with PCN.

PCN supplied 20 physicians and 25 interdisciplinary team members both at the MNA office and at the Mira Health Centre Site. Evacuees were able to access family physicians, psychologists, nurses, medication and even eye glasses.

Enns said PCN will continue to offer any support it can.

“We’re still trying to figure out where people can go. Still trying to help them find some place to go over medium and long term, because we’re anticipating it’ll probably be July before anybody goes back,” she said.

On Sunday, Premier Rachel Notley said that although the province was moving into the second phase of the disaster – which is to assess damage and work on a re-entry plan for Fort McMurray residents – there is still no immediate timeline as to when residents can move back.

Parker said many of the Métis citizens have no homes to return to. Some of the most ravaged Fort McMurray neighbourhoods – Beacon Hill, Abasand, Centennial Trailer Park and Saprae Creek – were where many of the families lived.

“They’re still in shock. They’re going through a grieving process still,” she said.

Parker also noted that that some of the MNA’s Métis Urban Housing Corp. accommodations and the local Fort McMurray Métis  office have been lost to fire.

“The days ahead are going to be hard. We’re trying to get a feel of what we can do in the immediate future,” said Parker. “Our doors are open all the time.”