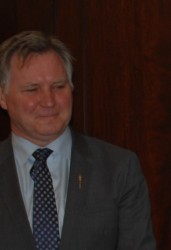 Alberta Indigenous Relations Minister Richard Feehan has a unique insight into a government system that is failing Indigenous children in care.

“I am abundantly aware, that here I am, 34 years after I first became a social worker, saying we still have an over-representation of Indigenous families in child welfare and children in care and that’s just completely unacceptable. It’s time for this to come to an end,” said Feehan.

Feehan spoke alongside Treaty 6 Grand Chief Randy Ermineskin, accompanied by Samson Cree Chief Kirk Buffalo and Louis Bull Tribe Chief Irvin Bull, on the Ermineskin Cree Nation on Tuesday following the release of reports by the auditor general and the Office of the Child and Youth Advocate, both highly critical of the government’s handling of Indigenous children in care and their families. Aboriginal children presently represent 69 per cent of those in care although they make up only 10 per cent of the children in Alberta.

The OCYA report contains eight recommendations focused in four areas: legislation, governance and jurisdiction; resources, capacity and access; program and service delivery; and outcomes and accountability. The OCYA came to is recommendations by, in part, meeting with youth and families impacted by the child intervention system. The auditor general, after reviewing three key processes in Alberta Human Services, directed that improvements be made in early supports and early intervention programming; in training staff in the area of intercultural understanding; and in ensuring processes supported a child-centred approach. All recommendations from both reports were accepted by the province.

Feehan said issues in Alberta Human Services, which is responsible for child and family welfare, fell on the shoulders of government as did the legacy of trauma and history of oppression that Indigenous people live with.

“We can’t just say to an individual parent, ‘Oh, you made a bad choice.’ We have to understand that came from somewhere and that came from somewhere in this province and therefore this province needs to take responsibility for the structures that we have set up, the history that we have been part of and we have to change all of those things,” he said.

Feehan pointed out that his New Democrat government had begun making changes. Shortly after winning the election last year, Premier Rachel Notley delivered an apology for Indian residential schools, directed her Cabinet ministers to implement the United Nations Declaration on the Rights of Indigenous Peoples, and is now making changes in school curriculum to include residential schools.

Feehan said that building relationships with Indigenous people needs to be done across all government departments and the top-down approach for making decisions had to be abandoned.

“Now we have Indigenous communities throughout this province who are absolutely ready to move forward, who’ve been begging for us to catch up to them and we’re finding a way to do that now,” he said.

Feehan committed to moving forward in full partnership with both First Nations and Metis communities, using the two reports as “a starting point but not as an ending point” in order to close gaps and end discriminatory practises. According to statistics laid out by the OCYA, Metis children are six time as likely and First Nations children are 30 times as likely as their non-Indigenous counterparts to be in care.

The province has a protocol agreement in place with Treaty 8, which sets out ongoing conversations on a consistent basis. The province is working on similar agreements with Treaty 6 and Treaty 7.

“The issues … need to change and we’ve committed ourselves to changing them,” said Feehan. “We intend to launch into change for not only a generation, but for all generations to come.”

Ermineskin, who said the reports contained nothing that First Nations were not already aware of, said First Nations needed to be at the discussion tables. He also said that, considering the new relationship both the federal and provincial governments were cultivating with Indigenous peoples, he had hope that changes would happen.

“It’s been good. Both governments, federal and provincial have been visiting more than past governments and I think that gives us a good indication of the direction we’re heading,” said Ermineskin.

Feehan said talks with the First Nations would begin this summer.