Metis landmark in Fort McMurray burns to the ground 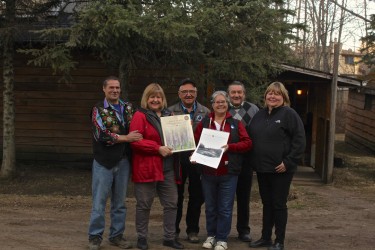 The sole remaining Métis trapper’s cabin in downtown Fort McMurray has burned to the ground.

“Harvey was just able to grab a few papers. The fire was coming down the hill so they had to take off,” said Bill Loutitt, vice-president for the McMurray Métis local. “There’s nothing left.”

Standing in front of his cabin is Harvey Sykes (left) with Labour Minister MaryAnn Mihychuk and (second from right) Bill Loutitt. (Photo: provided)

Owner Harvey Sykes was stranded in Draper one night and had to be airlifted out by a helicopter the next day, says Loutitt. Sykes was initially taken to Anzac. However, in the early morning hours of Thursday, evacuees from Anzac had to be transported further south due to the encroaching wildfire.

“It’s a loss, but the biggest thing is there’s no life lost,” said Loutitt.

Loutitt travelled north and is staying in a lodge just outside of Fort McKay.

Just last week, Sykes’ cabin had been the place where a meeting was held between the Wood Buffalo Métis and Federal Minister of Labour MaryAnn Mihychuk.

In a news release issued by the Wood Buffalo Métis, the cabin was described as “the unofficial heart and soul of the McMurray Métis community, as years of development have displaced the majority of Métis families, who originally called Waterways home.”

“I was so pleased to host a minister of the federal government in my home,” said Sykes in the news release. The meeting, April 26, just happened to be on Sykes’ birthday. “It was a wonderful opportunity to show her how the Métis lived.”

Mihychuk was treated to an authentic Métis experience that included a smudging ceremony and traditionally dried fish.

The cabin is off the power grid and the interior remains largely unchanged from when Sykes was first brought there the day he was born in 1952. The cabin housed antiques and traditional trapping tools and instruments.