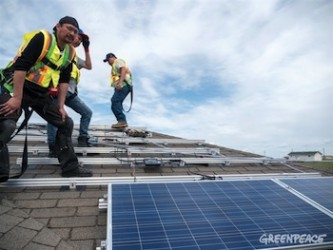 Two and a half years of concentrated effort has resulted in four public buildings on the Louis Bull reserve having solar energy. But more than that, it has shown that First Nations can take a leadership role in green energy development.

Louis Bull Tribe will be celebrating its green energy accomplishment – along with capacity development in the solar energy industry for six of its tribe members – on Friday with a ribbon cutting.

Bull was recently appointed as one of two Indigenous members on the province’s Energy Efficiency Advisory Panel.

For Bull, who spearheaded the work for the Louis Bull Tribe, with the support of both past and present Chiefs, it was a steep learning curve.

While the neighbouring Montana First Nation has also embraced solar energy, Bull wanted to take his development in a different direction.

“The one Montana was doing was more capital driven. I looked at mine as more of a non-profit organization public service driven,” said Bull.

Bull undertook research and development, assembling a strong support group of the “right people,” who could give him guidance. With that skill and expertise, Bull was also able to access government grants, local members were trained in the skills needed and solar panels started to be installed. Now, solar power is being accessed in the health building, Head Start education building, adult training education centre, and the fire hall/public works building.

The money saved through energy costs, says Bull, can now be used to fund other much-needed programs such as health, education and Elders.

“It’s not much money, but whatever can be saved can be used toward other programs,” he said. “But also in return, we’re having that environmental stewardship commitment where we’re able to produce energy without using that coal burner system or another system that is non-renewable that is causing detrimental damage to the environment.”

Solar power is a common means by which many First Nations communities are embracing green energy, says Bull. Solar power is easier to maintain and easier to install. Training can be done within a few months.

“Once you’ve learned how to do installations on your own, once you’ve learned the effectiveness of hardware, then you’re able to go out and develop your own private partnership or expand on the work your tribe or Nation is doing,” said Bull.

In moving forward with renewable energy development, Bull would like to see First Nations form a co-operative. By working together, he says, they can pool their expertise, develop trustworthy sources for advice and inspections, and buy hardware and equipment in bulk therefore reducing the costs.

The Energy Efficiency Advisory Panel is to provide a report with recommendations to Environment and Climate Change Minister Shannon Phillips in November. The government is supposed to move forward on those recommendations in early 2017. Bull is confident that recommendations specifically pertaining to Indigenous involvement, will get the nod and encourages Indigenous people play an active role in making green energy happen.