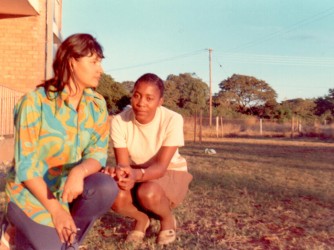 Marie Smallface Marule, a prominent activist and educator, passed away on Dec. 31, 2014, at the age of 70. Born on the Blood Reserve, she lived a remarkable life, both professional and personal, and blazed a trail in the field of sovereign Indigenous education.

As a child, Marie was intelligent and gifted, and her mother had enrolled her in a Christian school in nearby Cardston, a move that served to keep Marie out of residential school. At 16, eager to succeed, but discouraged by the oppressive racism and segregation she was enduring in Cardston, she asked to leave the Blood Reserve and her family to go to boarding school in Edmonton.

She excelled in all of her studies, and after high school, got her BA in anthropology and sociology at the University of Alberta. She then spent four years in Zambia, Africa, working with Indigenous peoples there.

“It’s like she started her career backwards,” said Ryan Heavy Head, director of Kainai Studies at Red Deer College, where Marie was president for over 20 years. “Most people start locally and work up to national and international work. Marie started internationally and brought back what she had learned there about Aboriginal people and their plights. Because of her experience, she just didn’t seem to have the fear that some people have here about questioning the mainstream paradigm.”

Back in Canada, she worked in Ottawa as the executive director of the National Indian Brotherhood (the present day Assembly of First Nations) and helped create the World Council of Indigenous Peoples. She was then invited to return to Alberta to head up the new Native American studies program at the University of Lethbridge. Here, between raising a family and teaching, she found her true niche—education. In 1992, after obtaining her Masters in anthropology, she accepted the position of president at the Red Crow Community College back on the Blood Reserve. There, Marie made it her mission to create a new educational paradigm for the Blackfoot community.

She and Ryan Heavy Head worked to create the Kainai studies program at Red Crow College—an accredited, transferable post-secondary curriculum designed from the ground-up with Blackfoot culture, language and knowledge as its backbone.

“She wanted to make post-secondary education relevant to our people,” said Marie’s daughter Tsuaki Marule, an educator herself. “She knew that our ways of knowing have as much value as any cultural knowledge base, and there was no reason why we couldn’t learn everything through our perspective—math, science—anything.”

Together Marie and Heavy Head took Kainai studies from a two-year diploma and a one-year professional development certificate to a fully developed program that taught post-secondary curriculum through the Blackfoot paradigm and lead to degrees and doctorates.

“She was our advocate and our shield when we got political pressure, both internally and externally,” Heavy Head said. “People would tell us, ‘If you don’t do what the mainstream is doing, our youth won’t succeed.’ Marie had no fear about conforming to the standards of the mainstream. She was such an advocate for sovereign Aboriginal education.”

Both Tsuaki and Heavy Head say that they hope Marie’s legacy will continue to live on in Kainai studies at Red Crow College.

“There was a break in our knowledge because of the residential school system,” said Tsuaki. “That was her passion—making sure that our people could get all of this traditional knowledge, so that it’s not lost forever.”