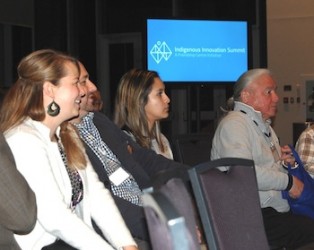 Indigenous Relations Minister Richard Feehan had high praise for the province’s Indigenous people as he spoke Monday night at the opening ceremony of the second annual Indigenous Innovation Summit.

Feehan said in the nine months he has served in his position, he has visited 26 First Nations and Metis settlements.

“Every single place I go, innovation is a keystone to what’s happening there,” he said.

He pointed to the work both the Louis Bull Tribe and Lubicon Lake Band have done with solar energy, noting that the province’s newest agency that is focused on reducing greenhouse gas emissions has a First Nations representative. Joseph Jobin, chief operating officer with the Treaty 8 First Nation, is one of six members on Energy Efficiency Alberta.

Jobin was just the most recent appointment by the government as the province moves toward realizing its climate leadership plan. In September, Louis Bull Councillor Desmond Bull and Roni-Sue Moran, director of industry relations corporation for Christina River Enterprises for the Fort McMurray First Nation, were appointed to the Energy Efficiency Advisory Panel.

“So they’re there, at the table, teaching us what we need to know,” said Feehan. “Those kind of innovations are already happening and I’ve got to tell you, as a government, that really excites us.”

Canadian Heritage Minister Melanie Joly, also in attendance, said the federal Liberals were investing $1.8 billion in arts and culture, more than any other G7 country.

“We believe that supporting and investing in arts and culture will drive creativity … and that creativity will drive innovation and innovation will drive prosperity. That close link between all these important concepts I think will be well presented in this summit,” she said.

The summit, to take place in Edmonton from Nov. 6-8, is the collaborative effort of the National Association of Friendship Centres and the JW McConnell Family Foundation.

Stephen Huddart, president and CEO of JW McConnell Family Foundation, said a number of philanthropy foundations decided to combine their efforts in response to a call to action from the Truth and Reconciliation Commission.

“Philanthropy needs to be fully engaged in this work. Civil society has a very important role to play, but shamefully it has taken us a long time to get here,” said Huddart.

“NAFC is proud to be making our vision of creating a field for Indigenous innovation a reality.  The ideas, the connections and solutions we make here over the next couple of days will have untold benefits for Indigenous and non-Indigenous people and organizations alike throughout this coming year and beyond,” said NAFC vice president Christopher Sheppard.

Sheppard noted that a direct result of last year’s summit and collaboration with the JW McConnell Family Foundation was the creation of the Indigenous Innovation Demonstration Fund. Seventy applications were received and $400,000 will be allocated for the successful innovative projects, to be announced on Wednesday.