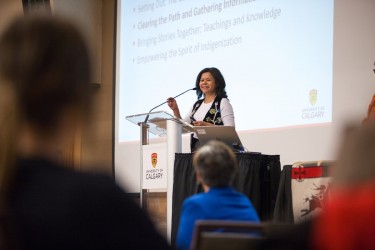 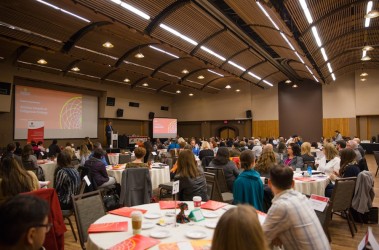 Independent Indigenous input will help inform the University of Calgary’s institutional-wide Indigenous strategy, but there is no plan to solicit that same kind of input of the larger Indigenous community when the strategy is in draft format.

That doesn’t mean Indigenous people won’t have hands-on involvement after the consultation process is concluded. It means that input will be limited to Indigenous personnel with ties to the university.

Ottmann points out that the four-stage process that will result in UCalgary’s Indigenous strategy has been heavily guided by Indigenous input. Two parallel documents: the UCalgary’s western terms of reference alongside an Indigenous framework, entitled Journey towards an Indigenous Strategy, have guided the process.

Community engagement for the strategy got underway in mid-October, with dialogue taking place in the inner city with organizations and agencies that work with Indigenous peoples in education, social services, employment, and the non-profit sector. This past weekend, on-campus and external stakeholders, including faculty and departments, corporations, non-profit sector, and education and research partners, were consulted. On Nov. 18, dialogue will occur with the Traditional Knowledge Keepers. There is also an on-line survey.

Ottmann notes that Indigenous writers are involved in the analysis and writing of the stories gathered through community dialogue.

The strategy will also be informed through literature review, the 94 calls to action by the Truth and Reconciliation Commission, and the Royal Commission report on Aboriginal Peoples. Work other post-secondary institutions have undertaken will also be consulted.

The draft strategy will go through internal approval processes including UCalgary’s board of governors in the spring.

“In terms of the draft document (going back to the Indigenous community) that is something we could think of doing, … but I think what I would like to have acknowledged is the extensive Indigenous participation we have so far,” said Ottmann.

“There will be opportunities to sort of visit the content and connect back with the (Indigenous) community, if need be … but how that’s going to manifest in detail, we’re not there yet,” said  Shawna Cunningham, co-chair of the Indigenous Strategy working group and director of the on-campus Native Centre.

While it has taken almost two years to roll out the formal process, Ottmann says many of the university’s faculties and departments have already begun implementing Indigenous initiatives and improving curricula.

Goals of the institution-wide strategy, she says, are to meet the needs of both Indigenous students and faculty and to start drawing on the knowledge and pedagogy of Indigenous peoples.

“Ultimately, it’s to become more inclusive… to be culturally competent as an institution,” said Ottmann.

But the Indigenous strategy will also go beyond the university’s borders, says Cunningham.

The strategy will target potential Indigenous students as well as equip Indigenous and non-Indigenous professionals from UCalgary to serve and work more effectively with the Indigenous population.

“We need to better understand what’s going on in the inner city in order to work for the betterment of Indigenous people,” she said, noting this could come through developing partnerships.

Cunningham says once the Indigenous strategy has been implemented, changes won’t happen overnight.

“This is a long term envisioning of the direction the campus can go,” she said.

University of Calgary’s institutional-wide Indigenous strategy will be launched next year on National Aboriginal Day.