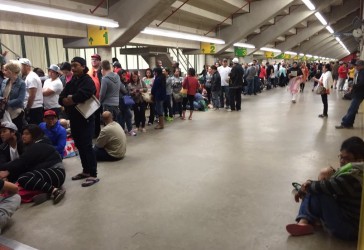 Residents who were forced to evacuate the Regional Municipality of Wood Buffalo will start receiving individual compensation Wednesday afternoon.

“This one-time emergency payment will help evacuees to meet their immediate short-term needs associated with the evacuation such as temporary housing and essential day-to-day expenses,” said Premier Rachel Notley.

However, Notley is asking those who do not need immediate relief to wait.

“Our aim is to get help to the evacuees who need it the most as quickly as possible,” she said. “So … if you don’t need emergency funding immediately please let those in desperate need be first in line.”

The funding - $1,250 per adult and $500 per dependent – is available to those under mandatory evacuation from Fort McMurray, Anzac, Gregoire Estate Lakes, and Fort McMurray First Nation, as well as those who were voluntarily evacuated from Fort McKay.

Two locations in Calgary and one location each in Edmonton and Lac La Biche will distribute the pre-loaded debit cards. More locations will be opened later including another in Edmonton. One family member can pick up debit cards for the entire family if they have the correct identification.

“Be assured that the funding will not run out,” said Notley. “There are enough debit cards for every eligible evacuee.”

She added that arrangements will be made to get debit cards to evacuees who have left Alberta.

On top of the immediate funding from the province, the Red Cross announced it will also be providing immediate assistance with adults receiving $600 each and children $300 each. That money will start to flow in the next 24 to 48 hours.

“This is the most important cash transfer we have done in our history and the fastest one. Combination of both the ability to raise money very fast in Canada and also using these electronic means to transfer money directly into the hands of those affected,” said Conrad Sauve, president and CEO of the Canadian Red Cross.

Over 80,000 evacuees have registered with the Red Cross with $67 million raised to date. That does not include matching funding from either the province or the federal government.

Notley says the province will match the money donated by individuals Albertans. She is not clear on Ottawa’s criteria for matching funding.

Sauve says the initial payout from Red Cross, which totals $50 million, is only the first phase of the Fort McMurray recovery effort.

“We don’t know what the total long term looks like at this stage. We’re one week in. It’s all going to go to support people. There’s going to be transitional issues,” said Sauve. ”All the funds will go to those different phases according to the needs.”

Notley says there is still no indication as to when residents will be able to return to Fort McMurray.

“We are basing this not on timelines, but … it’s a critiera-based thing that is focused on the security and safety of people going forward so that we maintain the very good record, although not perfect record, that first responders have established so far in terms of managing this disaster,” she said.