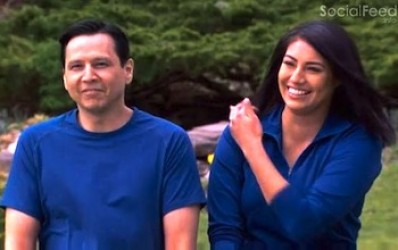 Two days after Joel Ground wrapped up his final appearance on The Amazing Race Canada, he says without hesitation that the experience was “life-changing.”

Ground and step-daughter Ashley Callingbull finished third. The final episode aired on Tuesday and the 10 teams taking part were re-united in Toronto for After the Race.

The fourth annual Amazing Race Canada was filmed throughout May. All contestants were sworn to secrecy.

“It was so hard not to give details. I wanted to tell my wife, but I couldn’t really tell her. She was trying to question me in different ways and I just had to be general and not give her any spoilers,” said Ground. “She wanted to know and she didn’t want to know.”

Instead, like everyone else, Lisa Ground had to wait for the outcome to be revealed.

“My wife was sad because we came in third, but then she was happy as well because she saw so much positive support for our team as far as online and around our community,” said Ground. “She was proud of us, of course, because we did so well.”

Ground and Callingbull, from the Enoch Cree Nation, received support not only from their home community, but from First Nations across the province and across Canada.

“I think we broke a lot of barriers,” said Ground. He and Callingbull were the first First Nations team on the program and their solid accomplishment spoke to other First Nations people. “So many people were behind us. I like to say we inspired people, that they felt they were racing with us… It was something that broke barriers, that said you can do anything, not to give up and to be resilient, and to keep going no matter what happens. And that’s kind of what we showed on the show because everything happened to us.”

Ground says he thinks non-Indigenous people got the same message

“To see us on national TV gave people another insight into us, as First Nation people and they got to see that we’re strong and resilient, and we’re definitely competitive,” he said.

On a personal basis, Ground says competing with Callingbull has brought the pair closer together, a goal he definitely set out to attain. He said he is used to working with his entire family and not only his eldest daughter.

“I got to bond with Ash and to spend so much time with her, go through everything we went through. I think we’re closer now. This is what I wanted forever,” he said.  Ground has been Callingbull’s father since 1999.

The timing was right to be part of the competition, as Callingbull had finished her run on Blackstone, a Canadian TV drama. With her free time, the pair decided to submit an audition tape.

“We told our story. We were just ourselves. We didn’t try to portray anything. We were just father/daughter, we’re different personalities, that we balanced each other out,” he said. “We had a good story.”

As the race went on, Ground says he was able to keep Callingbull calm and focused, while she kept him motivated.

Ground says he learned a lot about himself – not the least of which was that he was still athletic. Not having played sports since his youth, Ground handled himself like a pro during beach volleyball and golfing.

“I totally surprised myself just by being able to do that and do well! It was kind of like a confidence builder because it seemed that I got more confident as the race went on,” he said.

The very first segment, which involved hanging from a skytram in Jasper National Park, set the tone for the rest of the race. The clue read, ‘who wants to hang out?’ Ground says he thought it would be something easy.

“I had no idea we would be doing that!” he said.

The tram experience was only one of a number of extreme events the father/daughter duo shared, which Ground says made them stronger mentally, physically and emotionally.

Between events, teams were kept separated from each other and even when they met in the hotel pool, they weren’t allowed to interact. However, Ground says he and Callingbull got along well with the other teams.

Ground says he felt the editing job The Amazing Race Canada did of his and Callingbull’s story was a true depiction of their relationship.

“There is so much footage that gets filmed. Every team has a crew so everything is getting filmed,” he said.

Ground, a mechanic at Sundance Mazda, in Edmonton’s west end, says he feels “very fortunate” to have been a part of the race with Callingbull.

“It was a great experience. To get to know Ash better. I’ve always wanted that and to have that closeness. And we’re so much closer now. We have all these memories that we can share for the rest of our lives and nobody has that but us,” he said.