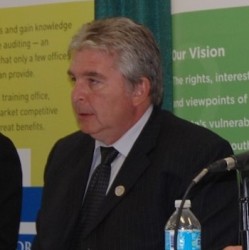 The frustration bleeds through when Child and Youth Advocate Del Graff talks about recommendations that have been repeatedly ignored by provincial governments.

“Since my office has been responsible for investigative reviews, we’ve made 34 recommendations to address suicide for young people. Of 34 of those recommendations, only eight have been met. That’s less than a quarter of them,” said Graff

Fifteen recommendations have received no response other than the government saying that they have been accepted. Graff says this lack of action by the province is not what he had expected.

Tuesday morning, Graff’s office released two investigative reports into the deaths of two young people. One of those youths, 17-year-old Onessa (not her real name), committed suicide. She was the target of online sexual exploitation. Onessa had received child intervention services within two years of taking her life. Onessa has Indigenous ancestry through her father, although that is not identified in the OCYA report, because, says Graff, Onessa had not seen her father since she was an infant and being Indigenous was not part of her day-to-day life.

In the report on Onessa’s death, Graff reinforces recommendations already made by his office to address youth suicide.

This past April, OCYA released a special report entitled “Toward a Better Tomorrow.”

“We identified 12 recommendations that we believe had a comprehensive kind of a way of understanding both what contributes to youth suicide and what are some protective factors, particularly for Indigenous youth,” said Graff.

In responding to the OCYA’s report on Onessa, Minister of Human Services Irfan Sabir said in a statement, “Our government recognizes that the rates of suicide for Indigenous youth are too high and we will continue to work closely across government, with Indigenous leaders and community partners to strengthen the way we support Indigenous children and families.”

Sabir also said that his department accepted the recommendations made by the OCYA in Onessa’s report “and commit to carefully reviewing them as we explore necessary actions to address these issues.”

Top of mind for most people has been the six Indigenous girls, who committed suicide in Saskatchewan in October.

“The recommendations (from “Toward a Better Tomorrow”) … just don’t call on a suicide prevention program only for Indigenous youth. We call for a broader kind of comprehensive approach for suicide prevention. For me that would make a difference. If government were progressively acting on that then we’d be much less likely to have those kinds of concerns that are coming up in Saskatchewan right now,” said Graff.

He repeated the need for a provincially-funded suicide prevention strategy that supports the development of community-led strategies across the province. Following this, he says, there needs to be capacity building for specific populations at risk, including Indigenous youth and sexually gender-diverse young people.

Graff said the report “Toward a Better Tomorrow” was meant as a message to government that “this issue demands action now. We’re still saying that. If you contact me in six months or in a year, I’ll still be saying that. It needs to happen now.”

Graff says he does not know how many more children need to take their lives before the government implements all the recommendations made by his office.

However, Graff does note that recommendations made in “Voices for Change,” the OCYA’s special report on Aboriginal child welfare which was released in July, would have had an impact on Netasinim, his family and community.

He points out that Netasinim was in a group home off of his First Nation at the time that he made the return visit to his home community. If First Nations had more resources, Graff says, conditions regarding Netasinim’s earlier care could have been addressed more readily and he may have been able to remain in care on his reserve.