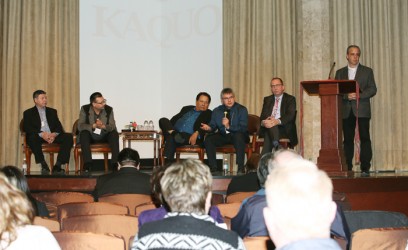 Directors of a newly formed Métis forestry company have grudgingly accepted a government investigation into their joint venture and claim that KAQUO will withstand scrutiny.

Iner Gauchier, chair of Peavine Métis Settlement and a director on KAQUO, says the provincial government is against Métis taking control of their own lands and that is why the investigation was launched.

Three Métis settlements - Peavine, East Prairie, and Paddle Prairie – split 45 per cent of the shares in KAQUO Forestry and Natural Resources Development. Active Energy Group, an international timber products firm listed on the London Stock Exchange, also has 45 per cent in the company. The remaining 10 per cent lies with British Columbia Grand Chief and former Chief of Westbank First Nation Ronald Derrickson, who brought the partners together. KAQUO’s first project will be to commercialise the approximately 250,000 hectares of forestry assets on the three Métis settlements, which it estimates contain 35 million cubic metres of merchantable timber. However, the venture cannot be undertaken until the government’s investigation has concluded.

Jessica Johnson, director of communications with Aboriginal relations, says the government department received a “few complaints” that KAQUO, which is the corporation established by the three settlements, breached policies in both the Métis Settlements Act and Métis Settlements General Council. Concerns were also voiced over the length of the agreement, which could go up to 197 years and there were allegations that the deal was struck without consulting membership. Johnson would not say if the complaints came from members of more than one settlement.

“My understanding is that (the three settlements) were given an opportunity to respond to the allegations before the investigation was launched … (and) based on their response and the seriousness of the allegations, the premier in his role as minister felt it was wise to clear the air and appoint an independent firm to investigate,” said Johnson.

KPMG was contracted in November to carry out the investigation. The final report is expected between March and May.

Gauchier holds that a letter of complaint came from one member from the Peavine Métis Settlement and that the KAQUO directors were not given a chance to respond before the investigation was launched.

Gerald Cunningham, chair of the East Prairie Métis Settlement and director of KAQUO, says although the MSGC has a timber policy that is binding on the eight Métis settlements, the MSGC also has a policy stating any resources on the surface belong to the individual settlements. Timber, he says, is on the surface.

Richard Spinks, CEO of Active Energy Group and president and CEO of KAQUO, says the government will find no wrong doings in the establishment or operation of KAQUO.

“The investors (in KAQUO) aren’t likely to invest $100 million in any business whatsoever without serious due diligence,” he said.

International investors have committed $300 million to the company.

“It’s the first time ever in Canada that a major publicly-listed company has recognized the need that the Natives own their own future,” said Derrickson.  “I said at the very start that I would not do any deal with the Métis or for the Métis unless the Métis got a good size of the pie.”

He says the three Métis settlements will receive $135 million cash up front plus 30 per cent of the fund that is supporting the operation.

Spinks says investors will be reinvesting a “significant portion of our funds” into exploratory work to determine other development that can occur on the settlements as not all the settlements have timber.

Timber development was established as the initial phase as that is the area in which Active Energy Group holds its expertise. Success in the forestry development, he says, will prove to the investors that the company is reliable.

Gauchier noted that KAQUO plans on investing beyond the settlements’ boundaries to “the Tolkos (sawmills) of the world, that’s where we’re leading into.” KAQUO funds would be used as seed money.

All eight Métis settlements were invited to take part in KAQUO, says Derrickson, with five coming out to an initial meeting.

At the KAQUO development summit held in Edmonton at the end of January, interest was expressed by settlements, who were not part of KAQUO.

Derrickson says adding more members to KAQUO would only strengthen the company and strengthen its position with the government. But he noted that KAQUO’s membership was not limited to the Métis people.

“All the Native people of Canada can cash in on this,” he said.