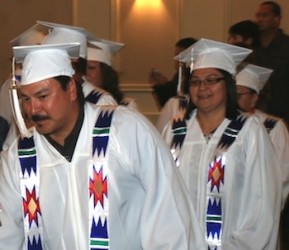 Mid-August and Geraldine Potts, director of operations with Nechi Institute: Centre of Indigenous Learning, has 98 applications in her hands for students who want to get culturally-aware addictions counselling training, but can’t afford to.

The institute has been without federal dollars for core funding since 2011. Students have been able to cover their costs through grants or generous band funding, and the institute has also received some charitable donations.  But now, with times tough, that funding has all but dried up.  In the beginning of August, Nechi Institute established a GoFundMe page to raise $450,000. That money will fully cover the costs of 58 students to take the community addictions training program, which runs at $7,800 per person.

Now is not the time, says Potts, for Nechi Institute to cut back on training addictions counsellors.

“It’s critical right at this moment because, if you just take a look at the devastation addictions has caused in our communities, we have a lot of applications from students, who want to help in their community, but they don’t have the essential tools that they need so training we provide gives them the tools and experience they need to go and help. Even to make a difference in one person’s life, giving them back control over their lives,” she said.

Potts says funding was cut to Nechi Institute because the school was neither accredited nor certified. But that issue has been rectified and Potts is looking to get core funding restored, especially in light of mainstream institutions offering addictions programming.  She has sent emails and letters to both federal and provincial ministers – she names federal health minister Jane Philpott and provincial education minister David Eggen as two recipients. She also notes that at last month’s annual general assembly for the Assembly of First Nations a resolution was passed to “urge” the federal government to both “identify financial resources to help support the Nechi Institute … (and) provide support to Nechi in capacity building in First Nations communities through a collective approach to health.” Potts says Nechi will be working with AFN staff towards this end.

Potts has applied for provincial Indigenous Health Careers bursaries, which, if successful, will cover $2,000 for each student in a newly–created introductory to addictions counselling program, which is a combination of existing programming.

While Nechi offers about 70 per cent of its academic courses, taught by Indigenous scholars, at its campus in St. Albert, it also goes out to the communities across Canada. Potts notes that for most bands, it’s a more cost-effective manner of providing training.

And, she points out, Nechi’s diploma and first-year certificate programs are transferable to a variety of Alberta post-secondary institutes as part of their bachelor of social work degree. Out-of-province transfers also occur but on a case-by-case basis. Nechi-trained students have gone on to become lawyers, doctors and judges, she adds.

While Potts would love to have had the money in place “like yesterday,” she says not having the funding, won’t stop Nechi from training students.

“You don’t give up. I think Nechi, in the 42 years they existed, there are always communities out there looking and wanting healing programs and you find a way. Whenever you sit down and do a ceremony you’re opening up those doors in the universe. And we believe that those are the doors that these student are going to walk through. This place was built on sacred ceremony and there’s always that hope that, yes, there is a way that our students can find a way to help the communities,” she said.

Potts points out that training counsellors is cost-effective.

“You just have to do the math,” she said.

Taking into consideration the cost for an addict to get medical help, or to be incarcerated, or to have his children put into care compared to the cost of training an addictions counsellor, it’s obvious where the government gets better delivery on its dollars, says Potts.

“There’s no comparison. Plus you’re giving this person control back over their lives,” she said.

Link to the Nechi Institutes Go Fund Me page: gofundme.com/2hpswd8y