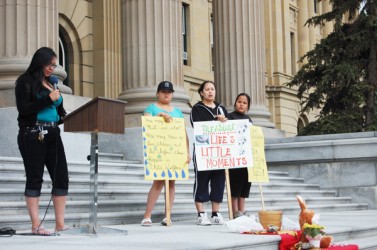 Another Aboriginal child has died while in the care of the Alberta government.

The death of the four-month-old baby girl brought a handful of people to the steps of the Legislature in Edmonton on June 6. Noticeably absent from the gathering were government officials. The baby died April 11 in hospital in Edmonton, six days after she was apprehended from her mother’s home. However, the child’s fate was only recently made public when Larry McConnell, the baby’s mother’s lawyer, spoke out. Neither the child nor her mother can be named in accordance to provincial privacy legislation.

Sharon Gladue tearfully addressed the small crowd that gathered in the bleak evening. Gladue spoke on behalf of the little girl’s grandmother, explaining that the distance the grandmother had to travel to get to Edmonton precluded the grandmother from being present. Gladue relayed how the child had been apprehended by RCMP and social workers and how the mother offered them the child’s car seat for safe transportation. At a court date, the foster parents arrived late and the baby was sick and had red marks on her face.

“With all their heart, they wish they could be here to tell everyone, especially the child welfare system, that they must change it. It is intolerable, unjustifiable, and demeaning for them to just walk in without cause and take away your child,” Gladue repeated what the grandmother said. “After that (the grandmother) just broke down. She had nothing more to say.”

Muriel Venne Stanley, who came to the vigil as a grandmother, mother, president of the Institute for the Advancement of Aboriginal Women, and vice president of the Métis Nation of Alberta, said the province of Alberta apprehends more children than any other place in the world.

The little girl is the second child to die while in care in the last three months. There have been four foster deaths in the last six months. Of the approximately 9,000 children in care in Alberta, 70 per cent are Aboriginal.

Venne Stanley called on mothers, grandmothers, sisters and aunties to pull together.

“There is no other answer than we take care of our own children. Once you go into the system or the police are called, you are helpless,” said Venne Stanley. “It’s not unlike what happened with the residential schools.”
Her sentiments echoed words spoken earlier by Tony Callihoo.

“It is time we learn that life is a gift. Just as our children are a gift to us, that we can all our relatives, pull together. Through prayer, through support, things can come about,” said Callihoo.

Father Jim Holland, with the Sacred Heart Church of the First Peoples, expressed concern with the lack of interest from the general public, noting that several months before almost 300 people crowded the steps of the Legislature to protest abortion.

“Where are the people concerned about the children that are dying? Where are the churches? Why aren’t they speaking out? That is my question,” said Holland.

He also chided Social Services Minister Yvonne Fritz for not addressing the issue adequately, saying, “If this child was in a rich family or a middle class family and was taken away for some reason and died, would the minister speak out? Is the policy because … some of the families who don’t have as much as others, they take their children, and their children die, and nothing is spoken out? Where is government who is there to protect all human beings in this province?”

Holland said mothers and families do not know what to do when their children are apprehended.

The vigil was organized by the Friends of Children in Care. In mid-May, the Creating Hope Society held its annual Blanket of Remembrance Round Dance to raise awareness of the Aboriginal children who have died in foster care. The ceremony also followed traditional ways of releasing a child’s spirit.

Autopsy results of the cause of the baby’s girl’s death won’t be available until September or October.