Fort McMurray evacuee says needs of others much greater than his 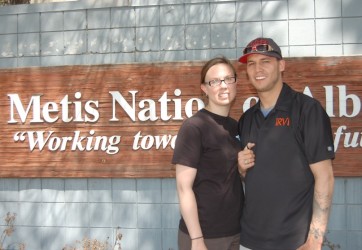 Nothing can make up for what Mitchell Tremblay has lost.

“You could give me a million dollars and I’d rather have what I had before and I know I’ll never get that back,” he said Saturday, from in front of the Metis Nation of Alberta office in Edmonton. He was there, along with other Metis citizens, to see what services were available.

Photo: Mitchell Tremblay and girlfriend Ann Cullihall lost their home. Tremblay is one of 5,000 Metis citizens evacuated from the Regional Municipality of Wood Buffalo and who came to the Metis Nation of Alberta office on Saturday to see about services.
(Photo: Shari Narine)

Tremblay has received confirmation that the mobile home he purchased four and a half years ago and shared with his girlfriend Ann Cullihall in the neighbourhood of Beacon Hill has been lost to the wildfire that ravaged the community of Fort McMurray most of last week.

“I feel devastated, kind of shocking. Hasn’t hit yet, until you go back and see what you’ve lost. I’m hoping we can get in there and dig up anything. I’m not expecting anything to be there but if there’s something small there I’ll be happy with it,” he said.

“It’s really overwhelming right now,” agreed Cullihall. “But the important thing is all our family is out.”

A couple of Cullihall’s cousins also lost their homes, but they believes Tremblay’s mother’s home, in the neighbourhood of Abasand, is still standing.

“Everywhere surrounding her is gone. But her home is standing. We’re hoping for the best,” said Cullihall.

Tremblay, Cullihall and Tremblay’s little brother fled Fort McMurray last Tuesday. When they left their neighbourhood, Tremblay said Cullihall began “freaking out” that they had left behind the family pet. Because the RCMP wouldn’t allow them to turn around, Tremblay jumped out of the car and ran back through a gridlock of traffic. Cullihall kept on driving. At home, Tremblay collected the dog and they drove out in his truck.

“When you’re in such panic like that, you don’t think to grab anything. I just grabbed the dog and I was gone. Now that I think about it, I could have grabbed something. My truck was in the garage, I could have threw stuff in the box. It all comes to you after but when you’re in that kind of state, you’re just in full panic. You just want to get out of there,” he said.

With the fire starting to encroach even further, Tremblay left Beacon Hill by taking the greenbelt through the ditch. He met up again with Cullihall on the highway. By then, Cullihall’s car, which had only a quarter tank of gas, had run out of fuel. They abandoned the car. Tremblay said he put up a couple of posts telling people to help themselves to the car.

“I don’t care if I get it back or not, as long as everyone got out of there safe, that’s what matters to me,” said Tremblay.

Tremblay made arrangements to meet up along the highway with his mother, who left work in Gregoire, and his brother, who had been working at camp.

Driving was “really scary,” said Cullihall, with fire on one side of the highway as she made her way out. “You didn’t think about nothing but your safety. You didn’t think about any of those materialistic things that seemed so important to you before. You left what you had to and you just made sure of your own safety.”

It was adrenaline that kept them going, said Tremblay.

On Thursday, Tremblay and his family made it to Edmonton. Now there are five people and three dogs staying in Tremblay’s brother’s Edmonton home. Accommodations are tight, Tremblay says, but “a lot of people don’t have that option to have a little bit of comfort. We do.”

Unlike some of his friends, Tremblay’s home is fully insured.

The need becomes clearer at the Northlands EXPO centre, where some evacuees have found shelter in Edmonton.

“They’re offering quite a bit of stuff but we’re set up. There’s a lot more people that need. So we’ll leave some of the resources for them who have absolutely nothing,” said Tremblay. “We’re letting people in the line go ahead of us. There are people who need it more than us. There are families who have nothing, that don’t even have a tank of gas or $10 or nothing. That’s the kind of people that we’ve really got to help out.”

Cullihall says the immediate funding being offered by the province - $1,250 per adult and $500 per dependent – is welcomed. They left Fort McMurray with only a suitcase each.

“When you’re out purchasing things, you think, ‘I have nothing.’ It’s really hard to think about but I think it won’t actually hit you until you’re actually back there and you see it,” said Cullihall. “You take it day-by-day.”

She says she’s heard it will be at least three to four weeks before they can return to Fort McMurray to assess their personal losses.

Tremblay is a heavy equipment operator at Syncrude. Cullihall works at the Fort McMurray hospital. Both say their employers have been supportive.

They have thought about not returning, says Cullihall, who has lived in the community for nine years.

“I think everything has crossed our mind in the last couple of days, but Mitch was born and raised there. It’s his community and we’re going to do what we can to rebuild it. If we all work together, I think we can get there,” she said.

“Fort McMurray can be rebuilt. We’ll do it as a community together,” he said.