Donations coming in, going out to Treaty 8 evacuees 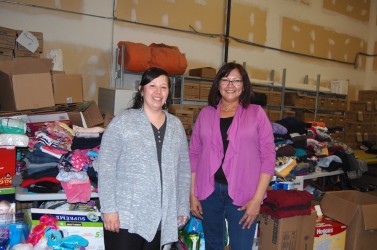 People are being generous in their support of First Nations people, who have been displaced by the wild fires burning in the Regional Municipality of Wood Buffalo.

“We’re getting in lots (of donations) and the nice thing about it is we’re getting them out of the door too, they’re getting to the people who need them,” said Joe Jobin, chief operating officer for Treaty 8.

The Treaty 8 sub-office has become the hub of activity since late last week when a list of supplies needed for evacuees went up on the Facebook page.

A van of supplies came in over the weekend from the Siksika First Nation and on Tuesday, Maskwacis brought in a vanload of donations as well.

On Monday, UNIFOR Local 21A from Strathcona delivered a cheque for $5,000.

“They’re good guys,” said Jobin. “They wanted to make sure First Nations were getting some help as well.”

Donations are being distributed to evacuees in Edmonton and also being sent north, including a Canadian army plane that made the trip to Fort Chipewyan. Athabasca Chipewyan First Nation declared a state of emergency last week with about 100 of its members returning to the First Nation. ACFN has partnered with the Fort Chipewyan Métis and Mikisew Cree Nation to coordinate and share resources.

Jobin says he has also been directing many First Nations to send their donations directly to reception centres that are operating in St. Paul and Lac La Biche. He also notes that Beaver Lake Cree Nation and Chipewyan Prairie First Nation are taking in evacuees, as is Swan River First Nation.

“Everybody is pulling together,” he said.

Jobin says it’s still too early to have any figures as to how many Treaty 8 people have been displaced or lost their homes, but he notes that some low-income housing units in the neighbourhood of Timberlea were burned down.

“If it’s low income housing, more than likely, it’s going to affect some of our members,” he said.

Jobin says that Treaty 8 has offered the Athabasca Tribal Council space in the sub-office.

“The unfortunate thing about this is that everybody in Treaty 8 territory, this is the third big evacuation in four years,” said Jobin.

In 2011, there was a mass evacuation because of the Slave Lake fire and last year, Big Stone Cree Nation evacuated because of a wild fires in Wabasca area.

“The scary part is a lot of our communities are looking at this and saying, ‘Oh geez,’ because a lot of them are on stand-by. They are all kind of watching because everything is dry up north. That boreal forest is dry,” he said.

Jobin says while the office is only taking in and distributing donations at this point, he expects it will soon be lending a hand in finding more permanent accommodations for members.

On Monday, after touring Fort McMurray, Premier Rachel Notley said re-entry planning is underway and a schedule for re-entry is expected within two weeks.