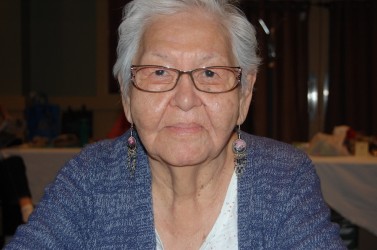 “The Creator was looking after us because no lives were lost in that fire. That we have to be grateful for,” said Marie Celestine Adam.  “I just prayed and prayed all the time. I prayed for everybody and anyone. I made an offering twice to the fire spirit. With everybody’s prayer, we helped. I’m sure everyone was praying.”

More than a week after her harrowing escape from a rapidly burning Fort McMurray, Adam’s voice is still low and strained. She says she’s not sure if she feels safe right now.

“Yes, in a way and in a way not because it’s hard to say how a person feels. I don’t want anybody to ever go through what I went through,” she said.

May 3 started with Adam planning to deliver homemade soup and traditional medicine to her sick daughter. But that all changed when she received a phone call from her granddaughter in Stony Plain telling her that Abasand, a neighbourhood in southwest Fort McMurray, was burning. What followed were hours of confusion and fear after Adam left her downtown seniors apartment. Multiple phone calls on a borrowed cell phone, city bus rides, walking, walking, walking and finally being picked up by a different daughter. They made their way to Dunvegan Gardens in the Draper area of the city where they thought it would be safer.

“We sat around waiting and there was fire on the other side of hill from where we were,” said Adam.

Then the Dunvegan Gardens owners decided to leave. Adam had never met the owners before but they offered her a space in their small car. Her daughter told Adam to go with them. She did.

“A ways down the road it was burning on both sides, black smoke, I kept talking to him (the driver), to keep his mind, said, ‘Don’t stop, don’t stop.’ We didn’t get too far then we came to a cop at the intersection then he told us to take Highway 63,” she said. They made it to Anzac where they spent the night.

The next day was more moving, more horrors. Evacuated from Anzac, Adam caught the 2:30 p.m. bus out. Near Conklin they came across two accidents. It took them five hours to get to Lac La Biche. There was only water on the bus. In Lac La Biche, Adam grabbed a slice of pizza and then was on the bus again. She didn’t arrive in Edmonton until 1:30 a.m

Adam says she wasn’t worried about the trip.

In Edmonton, her granddaughter from Stony Plain collected her. But before Adam could settle in with her and her six greatgrandchildren, she ended up in the hospital. She had left Fort McMurray without her medication. In Anzac she got some of her medication but not her blood pressure pills or blood thinners. Adam also has a pacemaker. Adding to Adam’s stress was being told, when she went to pick up a prescription at a chain store pharmacy in Edmonton, that she had to pay outright for medication she knows is covered by First Nations Inuit Health Benefits.

Right now Adam is settled in Stony Plain and she hopes to make it a permanent re-location. Prior to the fire she had applied for housing at a senior complex in Stony Plain. Now, she is being told that everything will be done to try and accommodate her new needs.

Adam doesn’t know the condition of her home in Fort McMurray. Fire crews concentrated their efforts in the downtown area, keeping fire damage to a minimal although smoke and water damage are still possibilities. Adam, a member of the Athabasca Chipewyan First Nation, has lived in Fort McMurray off and on since 1971.

“You can’t explain, can’t explain how a person feels because one minute you seem to be okay, the next minute you’re not,” she said. “I’m really getting stressed out. I’m not worried about if my stuff is there… that’s the least of my worries. My two daughters and my two granddaughters and my great grandson are all out here, so I’m not worried about the family situation, but still, I don’t know...,” she trailed off.

The province is offering mental health support to all evacuees.  Boyle Street Community Services and The Mustard Seed Society, both in downtown Edmonton are also offering counselling.