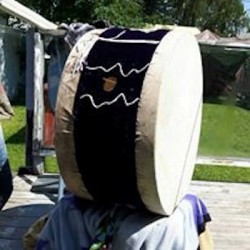 “We heal people and have some sort of impact and remind them of who they used to be or what they were and maybe help them,” said Powder of her all-women’s drum group Chubby Cree.

Five people from Edmonton’s homeless community have approached her after Powder has drummed and sang to tell her how Chubby Cree helped them change their lives and to be sober. And Powder says she has seen many people crying while she and her daughters and grandson drum and sing.

“To us, crying is healing,” she said.

A member of the Samson Cree Nation, Powder was raised in Sandy Beach and started singing in a drum group with other girls when she was five years old. She continued with the drum group until she was 15, guided and encouraged by her uncle and grandfather. But then she “put that aside.”

When she had children she decided she wanted to teach them their culture and how to sing.

She started her drum group two years ago and “came out of the closet last year.” Powder is joined at the drum by her daughter Robin Powder; twin daughters Shashony Green and Shacony Green; former daughter-in-law, whom she has taken in as her daughter, Ferrah Kootnay; and Robin’s six-year-old son Noah Green.

The group is named after Powder’s late brother Rick Powder, who called himself Chubby Cree. Rick helped Powder raise her nine children. His loss, this past March, was a “devastation for me and my kids,” she said.

“I always told my kids when they were young that one of these days I was going to have a women’s drum group. One of these days. And sure enough, 20 years later I finally did it,” she said.

And Chubby Cree has been busy. Powder takes particular pride in being asked to perform in the memory of murdered and missing Indigenous women, girls, men and boys.

“We sing to the Creator first, we pray and then we honour our women and children. We promote and respect our Elders. This is how we strive through our drum. This is our own connections to the ones we’ve lost,” she said.

Chubby Cree has performed in a variety of venues in Edmonton, including the Boyle Street Community Centre and has a regular Friday noon-hour drumming at the Bissell Centre. The drum group also drummed in the annual Women’s Memorial March and in Gay Pride parade in support of the two-spirited people, both in Edmonton.