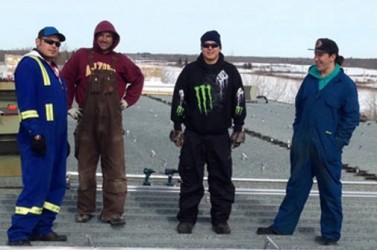 “This community of Montana band … is a community of leadership and therefore the perfect place for us to be,” said Feehan

The First Nation’s band office along with the water treatment plant already have solar panels. The school and daycare are next for green energy outfitting.

“The Elders have always told us to protect Mother Earth, do not poison Mother Earth. So we’re doing our part in the area of solar to listen to the Elders,” said Montana First Nation Chief Darrell Strongman.

The AISP will provide grants of up to $200,000 per project to First Nations, Metis Settlements and Indigenous organizations. The money will be used to install solar panels on buildings owned by communities or organizations.

The AICEP will help First Nations and Metis Settlements reduce emissions and save on energy costs through community energy audits funded to a maximum of $90,000.

“I have seen that our Indigenous people are leaders in the fight against climate change and (in) many other areas they exemplify climate leadership. Their commitment is rooted in traditional knowledge from the reality that Indigenous communities are being adversely impacted by climate change,” said Feehan.

Montana First Nation has held two sessions training 32 people in solar panel installations. Next on their agenda is to start outfitting the local residences with solar panels.

“They are doing training and school education programs at the same time. That’s a very comprehensive and progressive attitude that Montana is demonstrating and we anticipate that the rest of the province will want to join on board with them,” said Feehan.

Strongman said his First Nation was prepared to share its knowledge and expertise not only with other First Nations but with the rest of the province. In fact, he noted, the Tsuut’ina Nation had invited Montana representatives to the southern community to talk about solar energy. That visit is to take place Thursday.

“On one side of the coin in the area of climate, you know what? We’ve done a lot of talking. On the other side of the coin, it’s now time for action,” he said. “Climate is all about our children, grandchildren, great grandchildren and those not yet born. We have to protect them and provide those things to them as we are enjoying them today.”

While the two pilot programs are specific in what they are targeting, Feehan said lessons learns from the programs along with consultation with First Nations next year will help the province design other programs moving forward.

“We’ll learn the lessons that the pilot programs have to teach us in designing the program and we will also grow and be open to a wide variety of initiatives across the province including wind and biomass and other kinds of projects like that,” he said.