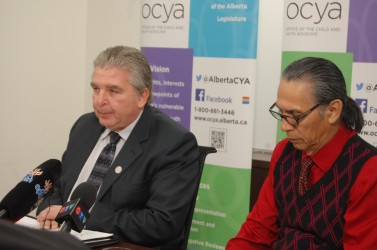 “It is impossible to come out of the system okay.”

Those were the words relayed by Child and Youth Advocate Del Graff, on behalf of a mother, who lost her two boys to suicide.

On Monday, Graff released a report that recounted the deaths of the two brothers, ages 15 and 18, and five other Indigenous youth in a period of 18-months. All seven children, ranging in ages from 14-18 years, took their own lives during 2013 and 2014 while either receiving services from Child Intervention Services or having received services within two years of their deaths.

“This is a report of immense suffering, sorrow and tragedy,” said Graff. “The death of these seven youth puts a face on these tragic statistics and makes it abundantly clear as Albertans we must respond.”

The report, entitled “Toward a Better Tomorrow,” puts forward 12 recommendations aimed at changing the high suicide rate for Aboriginal youth.

Graff notes that although there are “many efforts being made” today they do not sufficiently address the need.

“While suicide is complex and it’s compounded for Aboriginal young people because of their histories and the legacies that continue to impact their lives, it is also preventable,” he said. “The problem is not a lack of knowledge ….what is required is to make this issue a priority and a willingness to make this issue a priority and devote the resources and support needed to best effect the outcome.”

The province plays a critical role, says Graff, both in providing resources and funding to create the new infrastructure needed to support the youth, as well as interacting with the federal government, which holds jurisdiction over reserves.

Graff expects the province will accept the recommendations and work towards their implementation. While he is less confident about the urgency to undertake the measures, he does note, “We are in a different time than historically we have been…one that might be more fertile for this type of change.”

He points to the Truth and Reconciliation Commission’s final national event, which occurred in Edmonton in 2015; the recent ruling of the Canadian Human Rights Tribunal that federal funding for on-reserve child and family services is inequitable; and the awareness created by the Idle No More movement.

Provincial ministers for human services, Indigenous relations, and education and the associate minister for health all responded that they would take the OCYA’s recommendations seriously and work with partners to implement solutions.

But even if all the recommendations are implemented in a timely fashion, there is no quick fix.

“A hundred years of damage. That’s what we’ve done,” said Elder Francis Whiskeyjack, who consulted on the report. “(This was) cultural genocide, I think there could possibly be a treatment, a cure, but it’s going to take another hundred years to try and find a treatment or a cure for it, it’s possible.”

In the Aboriginal youth population, suicide is one of the leading causes of death, says Graff. In 2013, one of every seven reports his office received on deaths was related to suicide; in 2014 that number changed to one in every five; and in 2015, it was one in every four. While these figures represent overall reports, Aboriginal children and youth make up the majority of files undertaken by OCYA.

“So when that trajectory starts to reverse, I’ll be quite pleased. I think some of those recommendations if they’re implemented can start to do that, can start to change the trajectory,” said Graff.

Whiskeyjack, 68, says he doesn’t expect to see a large change in Aboriginal youth suicide numbers in his lifetime. For the past 13 years he has been working at the Amiskwaciy Academy with the Edmonton Public School Board.

“But with other young people I’m training as helpers, (the work) will carry on,” he said. “I am optimistic.”