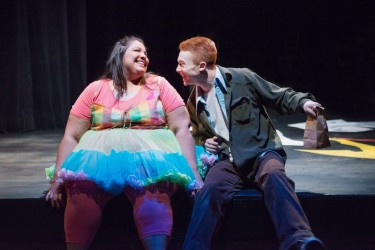 It is disheartening that plays such as Judith Thompson’s The Crackwalker, which premiered 36 years ago, are still deeply relevant today. Because of some darkness within us, the dreadful experiences of physical and substance abuse, internalized racism and infanticide that The Crackwalker explores are realities that remain with us.

Factory Theatre is in its Naked Season, with six “Canadian Classics Re-imagined.” The Crackwalker, a dark, loosely-based account of Thompson’s work as a social worker at Adult Protective Services in Kingston, Ont., is one of the six. It opens at the Factory Theatre March 24 and runs to April 10.

Factory’s approach to the play is to strip the production down to its barest bones, relying on plain costumes and minimal set and lighting to allow theatre-goers to focus only on Thompson’s words and the grave images she provides to us.

The playwright herself is directing the show for the first time.
Appearing as the main protagonist Theresa, a mentally-challenged Indigenous prostitute, is Ojibwe actress Yolanda Bonnell, who doesn’t take lightly the complicated role she’s been given to play.

“It is tough stuff, but it’s about getting your head in that space, trusting the words, trusting your scene partner and knowing that we’re all there to take care of each other,” says the Humber College grad Bonnell. “We have a good shake off ritual, because it can get inside of you. You’re putting your body through these emotions.”

The play follows the struggles of Theresa and her dysfunctional boyfriend Alan as they seek security and love with disastrous results. The play explores what life has to offer the meek and marginalized.
“Judith has this great analogy of how the lower class is trying so hard to grow and people keep stepping on the cracks with the boots of society and squishing them down. That’s where they like to keep the lower class people so there is no uprising. I think we have to be aware and stay woke, and know what’s happening in our society.”

Bonnell says that despite the challenges Theresa still finds ways to rise above it.

“I have felt the sting of internalized racism. When I got older I realized these things that people were telling me my whole life were not true at all. It’s so easy to buy into it. They say you don’t know you’re poor unless someone tells you you’re poor. My favorite thing about Theresa is her heart. She doesn’t see her obstacles as obstacles. Nothing really bothers her to the point where she would stop being who she is. That’s really a lovely outlook.”

This play was first premiered in 1980 at Theater Passe Muraille and was received with mixed reviews. Bonnell is prepared for a similar response.

“Every time I’ve performed, the audience surprises me in some way. Whether they laugh at places which I didn’t think were particularly funny. They may cry in places that you don’t think are sad.
Everybody’s journey through that is different.”

(The Crackwalker) poses a lot of questions. “Where does the healing begin? When do we start moving forward? …. I think, before we can open that up, people still need voices.”

She said the Factory Theater platform is one in which many people will leave the performance with similar questions of their own. Though the play may not be for the faint of heart, there is a legitimate responsibility to hear these stories.

“There is hope in this play,” said Bonnell. “It’s just some people will see it and some people won’t. It depends on what side of the wake you’re on.”