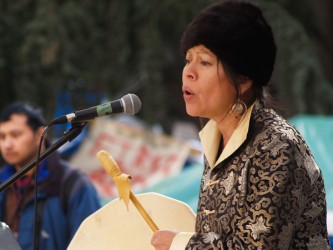 After nearly a decade fighting criminal fishing charges in B.C. courts, Stó:lo nation’s Kwitsel Tatel (Patricia Kelly) won not only an absolute discharge on May 9, but now the government must pay her nearly $2,500 for seizing her crate of salmon in 2004, accusing her of selling it illegally.

But the band’s senior policy advisor told Windspeaker that the “humiliations” the woman faced over the course of 200 court appearances, in particular an invasive anal-vaginal cavity search after she attempted to walk into the courtroom playing a hand drum, should never have happened in the first place.

“There’s no need for First Nations on lower Fraser River to face the types of charges that Patricia had to face,” Ernie Crey told Windspeaker. “The government can, with the goal of ameliorating disadvantage or poverty, reach an agreement to cover the sale of salmon.

“She had a lot of sympathy about the predicament she was in; that’s an understatement. This is not a woman with a lot of money. She’s a single mom with a couple kids who were quite young when these charges were first brought against her.”

And though she fought the case on her own, Crey said she is far from alone in being penalized for trying to subsist on the Fraser River fishery, an issue that has raised ongoing tensions with non-Aboriginal fishers in the region.

“There are a number of Stó:lo people who have been charged or faced charges,” Crey added. “Some have been fined, and some have been jailed.

“That doesn’t make Patricia unusual. What makes her situation unique is that she fought these charges, basically, on her own for a decade.”

Indeed, as her nine-year-long case came to a close on May 9, Kwitsel Tatel told Chief Justice Thomas Crabtree the legal battle has cost her dearly.

In an earlier interview with Windspeaker, she said that her battle for fishing rights is part of the larger work of decolonization.
“As a Coast Salish woman, that means to begin to think on your own two feet and live how you want to live,” she said. “It should be a choice.

“Right now, everybody is hurt by these policies. I personally went through a stand-off at my house over my fishing rights... We’re working at learning our language and eating our foods. We need the ability to live happy, healthy lives.”

For Bill Gallagher, an Aboriginal legal expert and author of Resource Rulers: Fortune & Folly on Canada’s Road to Resources, the Kelly case raises important questions about the promise–and costs–of fighting in the courts.

“This lady is a force of nature,” Gallagher told Windspeaker. “She kept this up and prevailed.

“It’s an amazing story given what she’s had to endure. It’s strange that somebody would be incarcerated the way that she was.”

Although he cautioned that he specializes in constitutional challenges and procedural cases–not criminal code charges like in Kelly’s case–Gallagher said that her court victory does resonate with a long line of successes that have reshaped First Nations’ ability to defend their interests.

From the historic 1997 Delgamuukw case, widely celebrated as a procedural victory for Aboriginal rights, to dozens of more recent victories, the courts continue to be a key site of struggle for First Nations.

But an individual battling alone in the courts is a much different matter than a First Nation pushing for a say on resource development in its territories through strategic lawsuits. Although Kelly won her decade-long battle, it no doubt took a heavy toll on her personally, he said. Is fighting the law worth it for Aboriginals?

“It achieves measurable results where those First Nations have parlayed their legal wins into political power,” Gallagher said. “To do that, there’s an intermediate step where they have to have commercial success.

“Once you have a court case that gets everyone to take them seriously, that makes them players. Then they can get land claims status – once they get political clout... These cases have to be targeted to allow wins to promote commercial advantages. That’s where the wheels start to fall off the winning streak.”

One important constitutional case which upheld Stó:lo fishing rights was R. v. Kapp. In 2008, the Supreme Court of Canada ruled that granting Aboriginals communal fishing licenses–despite restrictions on non-Indigenous commercial fisheries–was acceptable under the Charter of Rights and Freedoms.

The case was brought by the non-Aboriginal Fisheries Survival Coalition, which argued that granting special privileges to First Nations violated other fishers’ equality rights. But the court ruled that the government may enact policies aimed at alleviating a disadvantaged group’s poverty or marginalization, including Aboriginals’ right to earn a living from fishing.

But Crey argued that, despite defending the Aboriginal permits in the Kapp case, the federal government continues to hound Native fishers with minor fisheries breaches.

“Each and every year, there’s uncertainty as to whether or not the Department of Fisheries and Oceans will sign an agreement with those communities that will allow for salmon sale,” Crey added. “The only time they’ll sign an agreement with a lower Fraser (River) band is if it looks as though there’ll be a commercial fishing opportunity for the Canadian fleet.

“But there’s only a commercial fishery these days one out of every four years. This puts the Stó:lo people in a terrible position–people like Patricia. They have to wait for an opportunity to sell their fish out in the open, above board, for a season in which commercial fishermen also get an opportunity. I’ve always regarded that as unfair.

The string of court victories, particularly in B.C., should give the government pause about its current approach to enforcing fisheries laws, Crey said. A solution to the tensions, he added, would be more quickly found through conversation, not the courts.

“Why spend hundreds of thousands, perhaps millions, of dollars looking for small reasons we can frustrate a woman like Patricia or others?” Crey said. “We need to take these issues to a table. We need to discuss these things like grown-up Canadians.

“We’ve taken them on in the courts. It’s cost us millions of dollars and countless hours, but we’ve won... At some point, governments are going to have to say this is just too time-consuming, too costly, and it’s just fanning the embers of resentment in the Aboriginal community. There has to be a better way of resolving conflict.”