Truth-telling at the heart of “Reckoning” 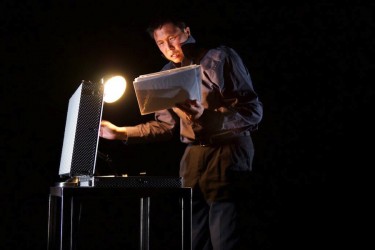 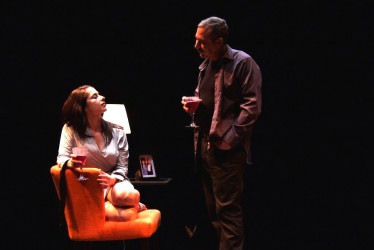 “Reckoning”, the latest production by Indigenous theatre-company Article 11, offers an intense experience with their offering of three 30-minute plays dealing with residential schools.

In a post on social media, veteran actor Monique Mojica called it a “Kick ass show. Skillfully crafted & performed. This is what our stories told by us looks like.”

Playwright Tara Beagan, co-founder of Article 11 and co-director of “Reckoning”, said she was initially inspired by her Ntlaka’pamux mother.

“My mom, a survivor, had to be talked into the Common Experience Payment application,” she said.

“She didn’t believe being kidnapped and held unlawfully as a six-year-old was a big enough crime to deserve recompense. Her kids disagreed and she finally decided to apply. When the monies came in, she wanted little to do with it. She bought me a laptop and put money away for my older sister’s two kids.”

Beagan decided to do three separate pieces, “because there are so many experiences,” she said, “from the Independent Assessment Process (IAP) to those who opted out to those who created the guidelines. We wanted three pieces because four seems too complete—as in so many of our traditions. Two would seem like we are illuminating polarities, whereas five would feel plentiful enough that folks might think we were making an attempt to do every version of the story. Three feels full, yet illustrative of the reality we are in, which is that this road to reconciliation has only begun.”

The first play, Witness, is about a non-Indigenous adjudicator for the IAP who listens to the horrific abuses suffered by children in residential schools.

A voice-over details the dollar amounts applied to various forms and frequencies of abuse; words taken from actual government documents which depersonalize the child victims by referring to them as ‘claimants’.

The words accompany the tortured movements of actor John Ng. His movements are brilliant and exquisite in the story they tell of one man’s downward spiral into Post-Traumatic Stress Disorder—the anguish, the disbelief, the physical effects of hearing the unrelenting tales of unmentionable abuse day after day.

“They were only children,” he says over and over, the only words he says.

Unbeknownst to Emmett, Shannon is the daughter of an accused abuser. Shannon is out for vengeance. What started as a fun evening for Emmett turns into something very different and very scary.

Jonathan Fisher, an actor from Wikwemikong Unceded Indian Reserve on Manitoulin Island, is in the third play, Survivor.

Alone, his presence fills the stage as he films himself, a screen behind him, as he talks about this country called Canada and the abuses it has perpetrated on Indigenous children, including himself, at residential schools.

At one point, he says, “Canada thinks it can take anything it wants, including children.” This survivor is planning an act of protest that will go viral. Fisher delivers a strong performance.

When asked if the three stories are true, Beagan said “I believe every story is true, whether it’s a metaphor for a “real” event or something that has happened and offers itself to storytellers in one way or another. If we are open to the stories of our ancestors and those who walk with us, work to do the telling in a good way, we can tell these true stories and try to bring people together for awhile. Ultimately, it’s about healing and growing stronger.”

Counselling and support along with traditional medicines are offered at every performance to those audience members who are triggered.

The support workers are from Native Child and Family Services of Toronto. On opening night, April 15, at least one person took advantage of the counselling.

“Reckoning” runs until April 24 at the Theatre Centre, 1115 Queen Street West in Toronto. For more information, go to www.article11.ca.

Article 11 is a Toronto-based company founded in 2013 by Tara Beagan and Andy Moro and is dedicated to producing works by Indigenous arts activists. Beagan hopes to tour “Reckoning” to key points across the world, including Australia.

“We are proud of it as a piece of art and strong in the knowledge that it is relevant and bold,” Beagan said.