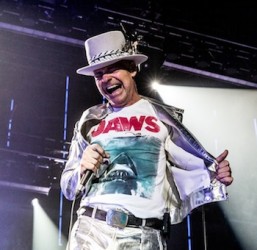 “In any type of a revolution, we always say, it’s the poets and the musicians and the gifted that take the lead and frame the new thinking in advance of everyone else,” said Stephen Kakfwi, president and CEO of Canadians for a New Partnership.

The Tragically Hip lead man and singer Gord Downie did just that Saturday night when he addressed concert goers in his hometown of Kingston – and right across the country in a CBC broadcasted and livestreamed event – and said, “We’re in good hands, folks, real good hands. [Prime Minister Justin Trudeau] cares about the people way up north, that we were trained our entire lives to ignore, trained our entire lives to hear not a word of what’s going on up there. And what’s going on up there ain’t good. It’s maybe worse than it’s ever been, so it’s not on the improve.

Trudeau was among those in attendance at the Rogers K-Rock Centre.

“Seeing the Prime Minister in his audience and to focus specifically on the need … Mr. Downie has got cancer, deemed incurable, and he’s thinking about Indigenous people in Canada and that is a man with limited time left on this earth,” said Kakfwi, who is former premier of the Northwest Territories.

Shortly after the concert, the Federation of Sovereign Indigenous Nations released a statement thanking Downie for “his public support of building better communities and improving the lives of First Nation people from across Canada.”

Both FSIN Chief Bobby Cameron and Kakfwi say it is gratifying to have a high profile person like Downie, not only bring attention in such a huge platform to the struggles of the country’s Indigenous peoples, but to also publicly praise Trudeau for the work the Prime Minister is doing in rebuilding the relationship.

Kakfwi also has high praise for Trudeau. In power for not quite a year, the Trudeau government has accepted all 94 calls to action by the Truth and Reconciliation Commission; committed to implementing the United Nations Declaration on the Rights of Indigenous Peoples; and set the groundwork for the national inquiry into murdered and missing Indigenous women and girls.

“Most prime ministers and politicians, they try to measure things and if they’re not assured they can pull something off or they don’t understand it, they stay away from it. Indigenous people are such a small part of the overall population politically, demographically we don’t count for much.…Prime Minister Trudeau is the first to say such powerful words, to talk about Nation-to-Nation relationships based on treaties,” said Kakfwi.

Kakfwi firmly believes that change is now starting. He points to the commitment made by the Alberta government in 2014 at the final national event for the TRC to include Indigenous history and residential schools in the Kindergarten to Grade 12 curriculum province-wide. Other provinces have since given the same commitment.

Kakfwi says these students will graduate from school knowing more about Indigenous peoples and Indigenous issues than their grandparents, parents, uncles and aunts collectively.

Downie’s words, says Kakfwi, is also part of the beginning of this change.

“He cares deeply about it. It’s really, really something that I hope touches the hearts and mind of Canadians. Musicians aren’t just about music. They’re about everything that goes on in the universe and how we relate to one another. And music is special that way. It connects. It’s the language of the universe,” said Kakfwi.

The Tragically Hip announced that Downie had terminal brain cancer in May and announced the band would be undertaking a nation-wide tour this summer.

“Our prayers are with Mr. Downie as he bravely battles brain cancer,” FSIN’s Cameron said.