Thompson gains success in OHL, with an eye to NHL career 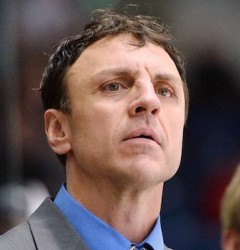 Rocky Thompson’s work will once again be closely monitored during the upcoming hockey season.

A year ago people were wondering how Thompson, a former professional hockey player, would fare in his first season as a head coach.

Thompson, a 39-year-old Cree, had spent the previous eight years working as an assistant coach in the junior and pro ranks, including the 2014-15 season when he was with the National Hockey League’s Edmonton Oilers.

After his one year in Edmonton, Thompson agreed to return to the junior level and become the head coach of the Ontario Hockey League’s Windsor Spitfires.

Thompson had his share of success with the Spitfires last season. The club managed to win 40 of its 68 regular season contests, a vast improvement on the 20-win campaign that Windsor had registered in the 2014-15 season.

Regardless of how the Spitfires fare during the upcoming year, however, team members realize they will still be playing next May. That’s because, as the host, the Windsor organization receives an automatic entry into the Memorial Cup tournament, which annually decides national Major Junior A bragging rights.

Thompson said his squad cannot afford to relax throughout the year, realizing it will still be able to challenge for a national title next May.

“There’s no comfort,” he said. “Instead, there’s a lot of pressure.”

The four-team Memorial Cup tournament will also include the champions from the OHL, Western Hockey League and the Quebec Major Junior Hockey League.

Should the Spitfires capture their league title then the OHL finalists would also advance to the Memorial Cup.

Thompson would love to see his club finish as high as possible in the regular season standings and then win its own league crown – to avoid any talk his team does not deserve to be in the Memorial Cup tourney.

“You want to go into those situations on top,” he said.

Early indications are the Spitfires will have a successful season. The squad, which opens its training camp on Aug. 29, is expected to have 17 returnees (nine forwards, six defencemen and two goalies) on its roster this season.

Plus the club’s brass believes it strengthened itself with a pair of recent trades, adding two NHL draft picks to its fold. The Spitfires acquired Montreal Canadiens’ prospect Jeremiah Addison in a deal with the Ottawa 67’s and they also brought in Julius Nattinen, an Anaheim Ducks’ pick via the Barrie Colts.

Thompson anticipates the Spitfires will make additional moves in an effort to improve their roster during the season.

Despite the fact Windsor will have a veteran-laden lineup this season, Thompson will in all likelihood have to do plenty of tinkering early on. As many as 10 of his players will be attending NHL training camps next month.

And it remains to be seen how many of them will be back in Windsor before Sept. 22, the date of the team’s regular season opener.

“In my opinion, they’ll all be back with us,” Thompson said of his players who will attend pro camps.

“But it will take time. Some of them could even stay (for the whole camp) and they could even play some regular season games.”

Though there will be a buzz around Windsor because the squad will host the Memorial Cup, Thompson realizes it will also be a challenging year for his club. It’s unlikely a day will go by without somebody mentioning the fact the Spitfires will be hosting the tournament next May.

Keeping his players’ minds on the present will be one of Thompson’s responsibilities.

“We’re going to educate them about that,” he said. “It’s all about us improving every day.”

Though he’s already played in the NHL himself and worked as an assistant coach, Thompson does not hide the fact he aspires to return to the league as a head coach at some point.

But he believes it’s a bit premature to start speculating on whether he would leave the Spitfires after coaching them in next May’s Memorial Cup.

“I’m only looking forward to this season,” he said. “That’s a question that’s better for the end of this season. I can answer that in June.”

Thompson spent the majority of his pro playing career, which lasted from 1995 to 2007, in the minors.

But he played 25 NHL games (15 with the Calgary Flames and 10 with the Florida Panthers).