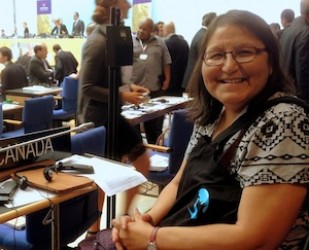 Respect that the Elders taught Sophia Rabliauskas for the land drove the Poplar River First Nation’s member to take an active role in getting Pimachiowin Aki nominated as a UNESCO World Heritage Site.

“The responsibility of looking after what’s around me, my environment, my community, the land, was taught to me by my parents, my father and grandfather especially, because it reminded us that each generation had its own responsibility to continue to look after that land and what’s on that land.

Sophia Rabliauskas participated as part of the Canadian delegation to the 39th session of the World Heritage Committee in Bonn, Germany, last year.

“A lot of people take on that responsibility and take it very seriously and therefore they do whatever it takes to take care of that land, to protect it and preserve it for future generations,” said Rabliauskas.

What it took was 16 years of hard work by the five Anishinaabe First Nations—Poplar River, Pikangikum, Little Grand Rapids, Pauingassi and Bloodvein – working alongside the Manitoba and Ontario governments to get Pimachiowin Aki nominated as a world heritage site.

Parks Canada, the federal agency responsible for leading implementation of the World Heritage Convention in Canada, provided advice on the nomination.

All that work could come to fruition in July when UNESCO's World Heritage Committee meets in Istanbul. Pimachiowin Aki has been recommended for the designation by the International Union for Conservation of Nature and the International Commission on Monuments and Sites. Such a designation would protect the site from over-development.

"The Pimachiowin Aki nomination has been the catalyst for action in the international conservation community to address long-standing issues about Indigenously-managed landscapes,” said Mathew Jacobson, boreal conservation officer for The Pew Charitable Trusts. Pew is a global research and public policy organization.

Rabliauskas says it was a challenge to get the International Union for Conservation of Nature to understand the connection between land and Indigenous spirituality.

“We worked with the committee to help them improve their process,” she said. “They are starting to understand the importance of Indigenous people, the connections to the land, the spiritual connections they have to the land.”

At 33,400 square kilometers and stretching along the Manitoba-Ontario border, the area contains the largest protected section of that ecosystem in North America. It is home to more than 40 species of native mammals, including wolverines, moose, beavers, and timber wolves. It provides vital habitat for threatened woodland caribou and at least eight at-risk bird species.

“We’re starting to see the effects of climate change, change of landscape. The changes in the water, the lake that we live here, Lake Winnipeg,” said Rabliauskas. “That’s one of the things the Elders talk about is climate change and how we need to … find ways to address some of those changes.”

And they have learned much from the process. The five First Nations have reconnected, shared stories, developed land use plans and learned about their past, says Rabliauskas.

“This project was the work of people. It was a long haul and at times it wasn’t easy, but I think with the direction and guidance of the Elders, who believed in this project, that made it happen,” she said.

As well, the hard work has shone an international light on Pimachiowin Aki.

“Now they know that there are people out here, living off the land and really are connected to the land,” she said.