Students get a feel for university life 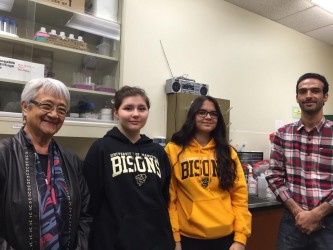 Forty Indigenous high school students from across Canada got a taste of university life in Mid-May.

The program is the University of Manitoba’s Verna J. Kirkness Science and Engineering education program. It is for Grade 11 students of Aboriginal descent, already considering a university degree in the field, and they spend a full week shadowing and learning from different researchers, scientists, and professors.

“It’s awesome to be able to see the university and get a feel for what the campus is like. I am also really interested in soil sciences, so it’s cool to go in and learn about the different departments I can study,” said Harmony Cunningham, a Grade 11 student from Joussard, Alta.

Cunningham is part of the soil sciences group—one of about 15 different groups the 40 students were divided up into, based on the science and engineering topics they were most interested in. She learned about the program through a guidance counsellor at her school last November.

“This helped me get a better understanding of exactly what I want to do. We were able to go the admissions office and see how to apply, what the tuition would be, and how long it would be... And it furthered in me that I want to take this,” she said.

Lena Yusim works for the University of Manitoba, and has a hand in coordinating the Verna J. Kirkness program. She is specifically responsible for soil sciences students—including Cunningham—and she makes sure everyone gets everywhere they need to go, meeting with the right people right on schedule, all week long.

“Their week really looks like a week in the life of being a soil scientist at the U of M. They are invited to join into the labs of professors and labs at the soil science department, and they get a broad introduction to some of the applications of the science...,” said Yusim, adding that the students were even able to conduct an experiment in which they gathered water from various sources in the area then tested for e. coli. As a quick side note, the tap water was clear, thankfully, said Yusim, while the Red River sample showed traces of the bacteria.

“It’s a 100 per cent completely authentic experience. They are even staying in the residence on campus. We pick them up at 9 in the morning, and our agenda begins right from there, until we drop them off at 4 p.m.,” she said.

After 4 p.m. the students have a few hours for themselves, including time to get their dinner, which comes from the campus cafeteria as part of their meal plan for the week (another university life feature for students who choose it).

Then they are involved in evening programming—significantly shorter than the daytime stuff-- which combines traditional Aboriginal culture with the science they’ve been learning. Traditional Aboriginal games, and a visit to the planetarium to learn about space and the stars from a First Nations Elder, are just a few examples.

And the university staff also does a special celebratory dinner at the end of the program. Verna J. Kirkness herself hands out the certificates to recognize the students for their participation in the program.

Kirkness is the Indigenous scholar who created the program, with the hope of increasing the number of First Nations students who pursue a degree in science or engineering. Her first degrees were in education from the University of Manitoba, but after years of activism and advocacy work, and even publishing books, she was awarded a few honorary degrees, including one from the faculty of law at the University of British Columbia.

“Another major aspect of the program is the mentoring that happens. It gives students the opportunity to make connections with researchers on campus so that when they do come to the university, they will have a familiar face who remembers them,” said Yusim.

Alongside Cunninghan, in Yusim’s soil sciences group, Antonina Kandiurin epitomizes the purpose of the program. She is from small-town Churchill, Manitoba, and will be the first in her family to attend university. Breaking that kind of ice is daunting for her, but the program is helping her overcome that fear.

“I’m going to be the first one leaving home to go to university… I was really nervous about it. I am planning on going to U of M, though, so it’s given me a feel of what it would be like and it’s given me more confidence,” she said.

For more information, go to www.vernajkirkness.org