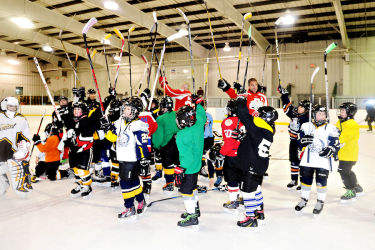 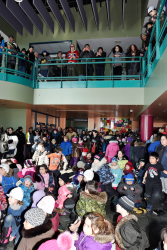 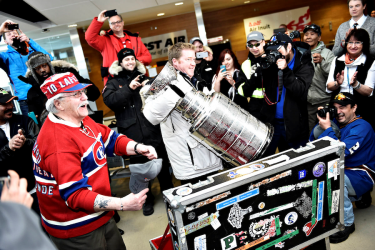 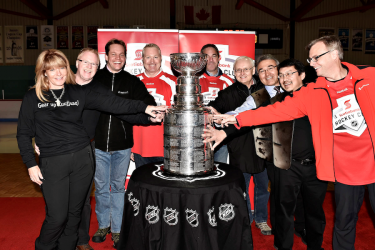 Project North officials are once again anticipating huge success for their Arctic Tour.

For the second straight year, members of the organization will be among those bringing hockey equipment to Inuit children in some of Canada’s most remote northern communities.

But like last year it won’t just be some equipment making the trip to the far north. A pair of former National Hockey League stars, Lanny McDonald and Mark Napier, will also be heading North.

And so too will the Stanley Cup, one of, if not the most prestigious and recognizable trophies in all of sports.

The excursion began on April 27 with the contingent from Project North flying to Yellowknife. The Arctic Tour officially kicks off today, April 28.

From today until Saturday the group will fly about 5,700 kilometres, visiting seven different communities in the country’s northern territories.

Thursday’s schedule will begin with the contingent travelling to Kugluktuk, a Nunavut hamlet.

A total of 25 new bags of hockey equipment will be donated to local youth. Community members will also have photo opportunities with the Stanley Cup, as well as with McDonald and Napier.

The tour will then travel to Resolute Bay Thursday night.

On Friday morning the trip will continue in Arctic Bay. Festivities will consist of a cultural presentation, including throat singing at an outdoor rink.

Then Friday afternoon the tour will continue in Pond Inlet. A parade is being planned from the airport to the beach.

“The whole community is going to be coming out,” said Project North co-founder and president Michelle Valberg. “The plan is to have the Stanley Cup, put it on a dog sled and take it to an iceberg. Can you just imagine that visual?”

Saturday’s hectic tour schedule will begin in the Nunavut hamlet of Iglooik. A total of 25 bags of hockey equipment will be delivered to this community.

And then the trip will conclude with a Saturday evening function at Yellowknife’s Legislative Assembly.

Valberg is once again anticipating the tour will be well received in all of the communities.

“They’re such massive hockey fans,” she said of the people who live in Canada’s north. “Most of them are Montreal Canadiens or Toronto Maple Leafs fans. I’m trying to convert them to the Senators since I live In Ottawa.”

A year ago, former NHLers Marty McSorley and John LeClair were among those on the Arctic Tour.

Representatives from various sponsors will be joining Valberg on this year’s tour. A total of 32 people will be making the trip.

Over the past seven years officials from the organization have made 22 trips, bringing hockey equipment to youth in Nunavut, as well as some remote communities in Labrador.

Those who have jumped on board to make the Arctic Tour possible these last two years include officials from the NHL, Scotiabank, First Air and Canadian Tire Corporation.

Valberg doesn’t want to get too far ahead of herself and speculate whether the Arctic Tour will become an annual event.

“We’ll get through this one and then we’ll see how things go,” she said. As was the case a year ago, Valberg anticipates it won’t just be children who will be thrilled to see the Stanley Cup up close. She expects many of the adults, especially those who remember seeing McDonald and Napier play in the NHL, will be keen to be part of the action.

“It was incredible last year,” Valberg said. “There was one older guy who fell to his knees and started crying when he saw John LeClair.”
No doubt McDonald and Napier will also be huge hits this year.

McDonald, known for his rather bushy moustache, played a total of 1,228 NHL contests, as a member of the Toronto Maple Leafs, Colorado Rockies and Calgary Flames. A highlight, during his 16-season NHL career, was winning the Stanley Cup with Calgary in 1989.

As for Napier, he was fortunate enough to win the Stanley Cup twice. He was a member of the league champion Canadiens in 1979. And he won his second championship with the Edmonton Oilers in 1985.
Napier appeared in 849 NHL matches. Besides Montreal and Edmonton, he also had stints with the Minnesota North Stars and Buffalo Sabres.