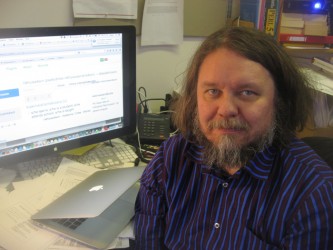 Need to look up a word in the Plains Cree language? There’s an app for that.

Well, not quite, but there will be a software package available in the near future.

Plains Cree is the first language that is part of the project “21st Century Tools for Indigenous Languages,” which “aims at developing software tools that support the revitalization and the continued use of Indigenous languages in all spheres of life: day-to-day communication, administration, business, and education, by both their native speakers and language learners,” said Dr. Antti Arppe, professor of quantitative linguistics at University of Alberta.

The tools include an intelligent web-based electronic dictionary, which will assist in understanding texts like web pages written in Plains Cree, a spell-checker that helps in writing Plains Cree texts, and a language training and education application that supports learners of Plains Cree.

Choosing to focus on Indigenous languages made sense to Arppe, who is originally from Finland.

In the late 1990s, Arppe worked for Lingsoft, a small Finnish software company that developed language tools for the Nordic languages. From this experience, Arppe says, they learned it was possible to start from almost nothing and create, in one or two years, a decent-quality initial version of the basic set of language tools (spell-checker, electronic dictionary). Having access to one or more good dictionaries for that language and comprehensive descriptions of the structure of the language’s words is essential, though, for the work to succeed.

Now working in an English-speaking environment, Arppe has discovered how important it is to his personal identity to keep hold of his language.

“More generally, there is no doubt that language plays a central role in the identity of a community, and that language is one of the key channels through which a community’s culture, traditions and values are maintained,” he said. “Therefore, the continued use of Indigenous languages, often under hard pressure from the majority languages and cultures, has great intrinsic value in itself.”

A number of factors played into the decision to focus on Plains Cree. The language is widely spoken by communities in Alberta as well as neighbouring provinces and territories, and is the only Indigenous language taught at the University of Alberta.

“In addition, it has an established standardized orthography, and its grammar and vocabulary are well documented in dictionaries, text collections and scientific research. All this provides us with a good spring-board for developing the various language software tools for Plains Cree,” said Arppe.

Arppe is joined on his team by Native speakers and scholars Dorothy Thunder, who teaches Cree at the University of Alberta, and Jean Okimâsis, from First Nations University of Canada and also author of the widely used text book for learning Plains Cree. Strengthening their work is access to three Plains Cree dictionaries:  nêhiyawêwin : itwêwina / Cree: Words by Arok Wolvengrey, the Alberta Elders’ Cree Dictionary (edited by Earle Waugh based on the contributions of numerous Cree Elders), and the Maskwacîs Cree Dictionary (Miyo Wahkohtowin Education). All three dictionary authors are also collaborating on the project, and Arppe and his team are also consulting with senior colleagues Sally Rice and David Beck, as well as Cree Literacy Network director Arden Ogg.

The project is in its second year of development. Arppe hopes to have the first proper version of the web-based intelligent dictionary completed shortly, which would recognize most of the forms nouns and verbs for the basic central vocabulary of Plains Cree. However, development of the dictionary will continue. Also to be developed is a plug-in version of the dictionary that would allow clicking on Plains Cree words on a webpage and getting the English translation, irregardless of how the word form is inflected.

Arppe hopes that this project will enable Indigenous communities to be able “to continue to use their own languages, in the broadest possible sense - that is, not just in day-to-day communication but also in administration, business, and education.”