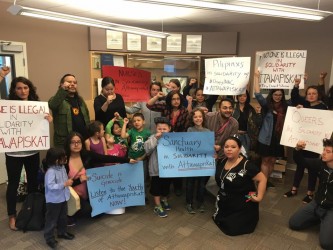 The Council of Mothers has declared victory after occupying the Vancouver office of Indigenous and Northern Affairs Canada for six days.

The grassroots protest was part of the national Occupy INAC movement that was launched following a rash of youth suicides in Attawapiskat, according to Grand Chief Stewart Phillip of the Union B.C. Indian Chiefs.
“Essentially, a group of young single mothers took it upon themselves to occupy the B.C. Region [INAC] office in Vancouver, in solidarity with the occupations that were taking place in Winnipeg, Ottawa and Toronto,” Phillip said.

The occupation began April 18, with allies from the Black Lives Matter and No One is Illegal movements, and continued through Saturday April 23.
“They were in contact with Minister Carolyn Bennett from [INAC] and Minister of Culture and Heritage Melanie Jolie, and let them know they were not prepared to leave until they had a written commitment for a face-to-face meeting,” Phillip said.

Late Friday afternoon, the Council of Mothers received a commitment from Bennett for a meeting, where they will press for increased funding for Indigenous language preservation and to restore the highly successful Cultural Connections for Aboriginal Youth program.

“Minister Bennett has agreed to a face-to-face meeting. We are not sure if Minister Jolie will be part of that meeting or if there will be a separate meeting,” Phillip said.

“There is an enormous disparity there with respect to making a sincere effort to revitalize Indigenous languages in this country, which is part of the commitment of the Truth and Reconciliation Commission,” he said.

“There needs to be substantive resources made available, and the Council of Mothers wants Aboriginal youth voices to be heard on the issues of poverty and a whole multitude of programs to be made available, to have some impact on the sense of despair and hopelessness that underpins the suicide epidemics in far too many of our Aboriginal communities.”

Phillip noted that INAC officials handled the occupation carefully to prevent the protest from spilling over into the street, as it did last month when activists set up camp at the BC Hydro office to protest the controversial Site C dam project in northeastern B.C.

“Had they acted in a very aggressive and heavy-handed manner, this building would look very similar to the BC Hydro building down the street. I suspect there would be a tent city outside this building. And it could very well have spread to other federal buildings in the city.”

Phillip said the youth suicide epidemic has reached “unprecedented proportions,” and warned that the Council of Mothers and the young people they represent will not tolerate empty promises.

“If they don’t feel any forward movement as the result of these face-to-face meetings, they’ll be back here,” Phillip said.

“I suggest to the Trudeau and [Christy] Clark governments, and all governments, that we’re at the wrong end of the season to simply ignore what’s going on here. This could prove to be the beginning of a long, hot summer, given the multitude of issues that confront the Indigenous peoples of this country.”