Search for Caitlin: Chiefs must take steps to care for Indigenous women, end violence against them 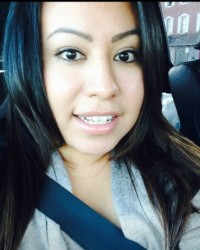 It isn’t enough that about a year ago a number of hereditary and elected chiefs in British Columbia picked up a commitment stick to live violence-free and to stop violence against women.

And that is what’s happening today, June 7, as chiefs, including Grand Chief Stewart Phillip, Grand Chief Doug Kelly and Kukpi7 Wayne Christian, participate in a search for another missing Indigenous woman.

“This is going another step. Okay, we’ve made that commitment (to end violence), can we start doing something in that area together,” said Chief Charlene Belleau of the Esketemc First Nation. “We have a responsibility.”

Potts, 27, had last contact with friends and family on Feb. 22. She was reported missing March 1 to the Vernon North Okanagan RCMP.

The last place she was seen was in Enderby, B.C. According to an article that appeared on the Missing First Nations: News and Alerts Facebook page, Potts “apparently told friends” she was moving to Calgary, but she has not been seen there either.

Police have conducted air and ground searches and the RCMP detachment is collaborating with Calgary police. As of March 25, the RCMP Southeast District Major Crimes Unit began assisting the Vernon North Okanagan RCMP with the investigation.

But there is only so much the police can do, said Belleau.

“To me the RCMP will conduct their search within the limitations of whatever it is they do, (but) where communities or families may feel paralyzed by someone that’s gone missing from their families, we really need to learn to be proactive.

“What are we going to do about it without leaving it to the RCMP or Search and Rescue and to the limitations of their searches? It’s trying to get our people to move another step,” said Belleau.

The search, in which Potts’ family and community members also joined, started with a ceremony.

“The ceremonies are important traditionally and culturally. Our people would pray. Spirituality is a big part of who we are as First Nations, and we believe that prayer and ceremony are really important to help us to free focus and also to put the spirit out there for the families and people who are grieving,” said mental health worker Irene Johnson, who coordinated the ceremony.

“We do have a lot of women who are still going missing,” she said.

As a mental health worker, Johnson is well aware of the role addictions play in the lives of many of these women.

“We’ve been dealing with addictions for 30, 40 years, and it’s really challenging to help people deal with all forms of addictions. I think we just need to start working with our younger generation, to help them be safer, to give them information in our communities, to make them aware of the dangers out there,” she said.

Belleau agrees, noting that education about high-risk lifestyles and the need to stop violence is something that is dealt with “day-in, day-out” at a local level on Esketemc First Nation. And this search underscores that need for change.

“What is disturbing to me is that even though we are on the eve of a proposed calling for a murdered and missing (Indigenous) women commission of inquiry that our women are still going missing and it’s time for us as Aboriginal people to do something about it and this is our effort,” said Belleau.