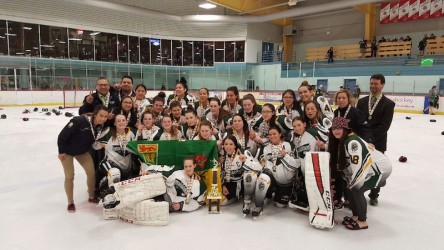 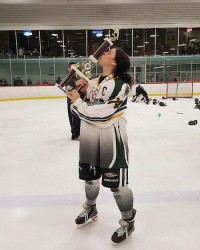 Delaney Ross ended up with a medal haul from her appearances at the National Aboriginal Hockey Championships (NAHC).

Ross, an 18-year-old forward from the Canoe Lake First Nation, participated in the last six national tournaments, including the 2016 event, which concluded this May 7 in Mississauga, Ont.

Ross was the captain of the Saskatchewan girls’ team, which edged the host Ontario squad 1-0 in this year’s gold-medal contest.

Ross scored the only goal in the championship final. And she scored both of her team’s goals in its 2-0 semi-final victory against Manitoba.
This marked the third consecutive year the Saskatchewan entry took top honours in the girls’ category.

“It was actually a really good experience,” Ross said. “And they made me the captain. Plus winning it three years in a row is pretty much unheard of. Not many teams can do that.”

Ross finished up with six medals in as many years in her NAHC appearances. She was also a member of the gold-medal winning squad at the 2011 tournament. And her clubs captured silver medals at the 2012 and ’13 events.

Ross has now used up her eligibility for the NAHC, which features Bantam (14-15) and Midget (16-18) players. But she will continue her career this coming season at Ottawa’s Carleton University.

Several American universities had also expressed interest in Ross.
“My marks weren’t very great,” Ross admitted. “So I have to stay in Canada to play.”

Ross, however, has not abandoned her hopes of one day securing a scholarship from an American school and playing in the NCAA ranks.
She is hoping if her marks improve early on in her collegiate career then perhaps she might be able to transfer to a school south of the border.

“I had talked to a lot of U.S. schools,” said Ross, whose father Marty served as an assistant coach with the Saskatchewan girls’ team. “But we slowly stopped talking about it because of (my marks).”

When she moves to the nation’s capital to attend Carleton, it won’t be the first time Ross has played away from home. In fact, in an effort to improve her hockey career, she has spent the past six years away.

For starters, she spent two years playing Midget AAA hockey with the North Battleford Stars. Then she spent another two years at the Midget AAA level with the Lloydminster Steelers. And for the past two years she’s starred with the Alberta-based Warner Warriors, members of the Junior Women’s Hockey League.

Though this marked the first year Scotti Burgess served as the head coach of the Saskatchewan girls’ entry, he had an inkling the club would fare well.

“I had an idea from the tryouts (the team would be strong),” Burgess said. “But you can never tell until you get elbow deep and play a couple of games in the tournament.”

The Saskatchewan squad staged tryouts at the Beardy’s and Okemasis First Nation this past December and at the Ochapowace First Nation in February. Club officials then made their final team selections following a camp at the Onion Lake Cree Nation in March.

Burgess knew he would have a strong nucleus to work with from the 2015 NAHC gold-medal winning side.

“I think we had 65-70 per cent of the players returning from last year’s team,” said Burgess, a member of the Montreal Lake Cree Nation.

No doubt Burgess was glad to have Ross’ experience to lead his charges. Ross had also scored the game-winning goal in the championship final of the 2014 NAHC.

Another player who stood out for the Saskatchewan side was goaltender Chantal Burke, who registered the shutout in the final and also backstopped her squad to a 2-0 semi-final triumph against British Columbia.

The Saskatchewan boys’ team had also entered this year’s tournament as the two-time defending champions. But it did not have the success its female counterparts enjoyed this time around.

The Saskatchewan boys’ team lost all three of its round-robin matches. It also was defeated in its quarter-final contest. The squad ended up winning its final game, 9-3 versus Team Atlantic, to end up in seventh place in its division.

Manitoba won the bronze medal in both the girls’ and boys’ division. Manitoba edged B.C. 2-1 in overtime in the girls’ bronze-medal game while Manitoba downed Ontario 6-1 in the boys’ battle for third place.