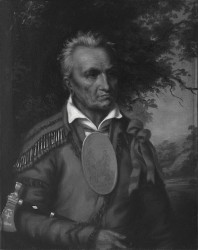 Across clipped lawns to the east, the slow-moving Niagara River underscores the striking Buffalo, U.S. skyline.

The pastoral surroundings belie the fact this is Canada’s bloodiest battlefield; 204 years ago these grounds rang out with black powder shots and, during the height of the war, the blast of an exploding powder magazine killed almost 400 men instantly.

Fighting for the Americans against the British during the War of 1812 was a Seneca warrior named Red Jacket, who took his name for a highly-favoured embroidered coat given him years earlier by the English, who employed him as a messenger.

During the American Revolution, beginning in 1765, the Seneca were allied with the British Crown, both because of long trading relationships and in the hope that the Iroquois could limit colonial encroachment of their territory.

But after their ally lost, the Seneca were forced to cede much of their lands to the new United States. Red Jacket negotiated on behalf of his nation with the United States, and helped to secure a small parcel of Seneca Territory in what is now New York state, staying behind while most of his people migrated to Canada for resettlement after the Paris Treaty.

Born in 1750, Red Jacket’s birthplace is debated, but historians agree he spent much of his youth at Basswood Creek in New York state, where his mother was buried after her death. Born into the Iroquois matrilineal system of kinship and descent, he became a chief of his mother’s Wolf Clan.

Red Jacket first entered historical record only because he was noticed as habitually wearing a bright red coat. Undistinguished as a young man for his war record during the American Revolution, he fled from the field at the battle of Oriskany in 1777, and early in the Cherry Valley campaign of 1778 he left the Indian Loyalist force, complaining it was too late in the year to fight.

Once, he brandished a bloody axe as evidence of his prowess but it was discovered that he had used the axe to kill a cow. War leaders such as the Mohawk Joseph Brant (Thayendanegea) later accused him of cowardice.

Redeeming himself in his sixties, Red Jacket fought bravely at the battles of Fort George in 1813, and Chippawa in 1814, thus disproving earlier charges of spinelessness.

In his mid-years, he developed a drinking problem and deeply regretted having taken his first drink. When asked if he had children, he disclosed that most of them had been lost to illness and responded: “Red Jacket was once a great man, and in favor with the Great Spirit. He was a lofty pine among the smaller trees of the forest. But after years of glory, he degraded himself by drinking the firewater of the white man. The Great Spirit has looked upon him in anger, and his lightning has stripped the pine of its branches.”

Red Jacket gained a reputation as an orator in his role as negotiator with the United States federal government after the revolution. In all portraits painted of him, he proudly wears a large silver “peace medal” awarded him by U.S. President George Washington. The engraving on it shows Washington on the right-hand side shaking Red Jacket’s hand; below is inscribed “George Washington”, “Red Jacket” and “1792”. Today the medal is displayed in the Buffalo History Museum.

Red Jacket’s shining moment came when he addressed Jacob Cram, a New England missionary, in 1805. The two sides met in Buffalo Creek, New York, and after meeting with his Seneca delegation, Red Jacket delivered a well-thought out speech that represented his people as a whole.

In a discourse about Amerindian tolerance for the differences of others, Ronald Wright in “Stolen Continents” writes that Red Jacket’s response to the white preacher is one of the best ever given to Christianity’s claims. “Which mentality, Red Jacket makes one wonder, is the more primitive: that which believes itself to have a patent on truth or that which pleads for cultural diversity, for tolerance, for mutual respect.”

Red Jacket, in his famous speech, asked his opponent: “Brother, you say that you are sent to instruct us how to worship the Great Spirit but … we only know what you tell us about it. How shall we know when to believe, being so often deceived by the white people?

In his speech to the U.S. Senate regarding his people’s acceptance of white settlers, Red Jacket said: “They found friends and not enemies ... they asked for a small seat. We took pity on them, granted their request; and they sat amongst us. We gave them corn and meat; they gave us poison (hard liquor).

“Yet we did not fear them. We took them to be friends. They called us brothers. We believed them and gave them a larger seat ... they wanted more land; they wanted our country. Our eyes were opened, and our minds became uneasy.”

Red Jacket married and had 10 children with his first wife, Aanjedek, but their union ended in divorce. None of their children survived their father, although Jacket as a surname was used by at least some of his grandchildren. Red Jacket then married Awaogoh, the widow of Two Guns, a Seneca chief who had been killed at the battle of Chippawa.

The great orator died of cholera and was buried in the mission cemetery, despite his opposition to Christianity, on the Buffalo Creek Reservation. His remains were later removed to Forest Lawn cemetery in Buffalo.